Mark Wilson ’09 has experienced firsthand the impact of the 10-year-old Summer Enrichment at Dartmouth program, which helps prepare under-resourced high school students for college. The Philadelphia native was in the second graduating class of SEAD’s scholars in 2004, entered Dartmouth in the fall of 2005 with fellow SEAD graduate Damaris Walker ’09, and volunteered with the program throughout his undergraduate years. But the power of SEAD was really brought home when he ran into SEAD ’08 graduate Jenny Kuang while working at a fair for prospective Dartmouth students in 2009.
Image 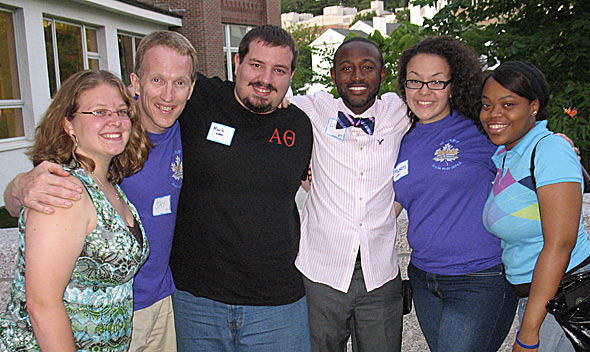 “She said she was trying to decide between Dartmouth and Stanford,” Wilson told a group gathered for SEAD’s 10th anniversary celebration event on July 3. “And I said, ‘Alright, well I don’t think you can really go wrong!’ She ended up at Stanford because that’s where she was leaning. But it was great that she, like other SEAD students, was able to say, ‘I’m trying to decide between these two very prestigious institutions because I can.’ SEAD gives you the tools to do that.”

Kuang and Wilson, who is now enrolled in a graduate program at Norwich University, are just two of the many SEAD success stories since Carol Fuchs approached former Dean of the Tucker Foundation Stuart Lord in August 2000 to discuss starting the program. Lord enlisted Education Professor Andrew Garrod, who is now professor emeritus following his recent retirement, and education instructor and former schoolteacher Jay Davis ’90 was recruited to serve as the program’s director.

That first summer in 2001, 30 students were invited from three high schools in Philadelphia, Dorchester, Mass., and Canaan, N.H., to participate in the joint venture co-sponsored by Dartmouth’s Tucker Foundation and Department of Education.

“I had sufficient anxiety about it all coming together that first year that my fingers were shaking too hard to type one morning four days before the program started,” admitted Davis, who in addition to directing SEAD, is also the supervisor of secondary teacher education in the education department and program officer for school outreach programs for the Tucker Foundation. “We quickly realized that one summer session of two weeks wasn’t sufficient to make a transformative effect with 15-year-olds, especially when many were picked for the program because they were struggling and still needed help to fulfill their potential.”

The current tenure for SEAD scholars is seven weeks over three summer sessions at Dartmouth, combined with three reunions of four to five days each. Since its inaugural year, 180 high school students have participated in the program, representing high schools from El Cerrito, Calif., to Spartanburg, S.C. One hundred percent of SEAD’s most recent graduating class has enrolled in a college or university after high school and one recent SEAD alumnus, Martenn Taylor ’13 of Bronx, N.Y., is currently a Dartmouth undergraduate.

Equally impressive are the number of Dartmouth students who have been involved, primarily during Sophomore Summer. (Dartmouth operates on a quarter system; all rising juniors spend the summer term on campus.) Nearly 2,800 sophomores have served as mentors, academic coaches, activities committee members, or helped prepare meals. Additionally, over 100 Dartmouth faculty and staff have volunteered as advisors to the SEAD scholars. Thirty-five Dartmouth students have also acted as resident winter interns in the participating SEAD high schools, serving as academic coaches and advisors during the regular school year. (SEAD hopes to have interns serving in schools year-round within the next two years.) 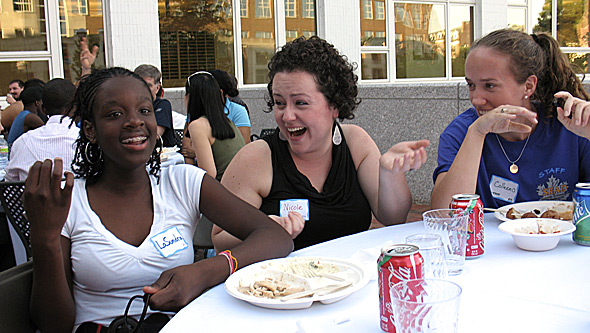 “Every one of the Dartmouth students who is involved with the program tells us that this experience has changed their lives forever,” Fuchs said during the SEAD anniversary celebration. “So we got a double product here, and we didn’t realize that would be the case.”

“SEAD involves so many members of the Dartmouth community in providing a potentially life-changing experience for young people,” said Richard R. Crocker, the Virginia Rice Kelsey S’61 Dean of the Tucker Foundation. “SEAD stands for Summer Enrichment at Dartmouth. Dartmouth is enriched by this program.”

SEAD has been featured in Whatever It Takes, an award-winning documentary that aired on PBS last spring and an online “replication manual” has been created for other institutions interested in developing similar programs.

Also impressive is the continued involvement of Dartmouth and SEAD alumni in the program. Troy Stewart ’07 is managing the residential staff this summer and teaching a humanities course, while SEAD ’06 Lee Smith, a rising junior at the University of South Carolina, and SEAD ’08 Miladys Perez are back as SEAD graduate assistants.

“I couldn’t get enough of SEAD,” said Perez, a Bronx resident who just finished her first year at Vanderbilt University, where she is a Posse Foundation Scholar. “I know how much it helped me and I wanted to be able to help others. The program got me to step outside of my comfort zone. College was always recommended to me, but I never knew someone who went to college. Now I’m fresh out of the college experience and can share that.”

Stewart, who heads to Johannesburg, South Africa, for four weeks this summer to work with co-founders of the African Leadership Academy before joining their organization in San Francisco, concurs. “Access to college students is very important,” he said. “Creating that desire, cultivating that fire within to really want something better for yourself and understanding that college acts as the means to do that. I think SEAD does that very well. But SEAD has also played a huge role in cultivating this excitement on campus about doing something greater than yourself.”