Dartmouth is 1st for Commitment to Teaching, 9th Overall in U.S. News and World Report 2011 Rankings

Dartmouth has moved up to No. 9 among the best national universities in U.S. News and World Report’s “Best Colleges 2011” rankings. Dartmouth is No. 1 for “Strong Commitment to Teaching” for the second consecutive year, in a new category the magazine created in 2010 for schools “where the faculty has an unusual commitment to undergraduate teaching.” 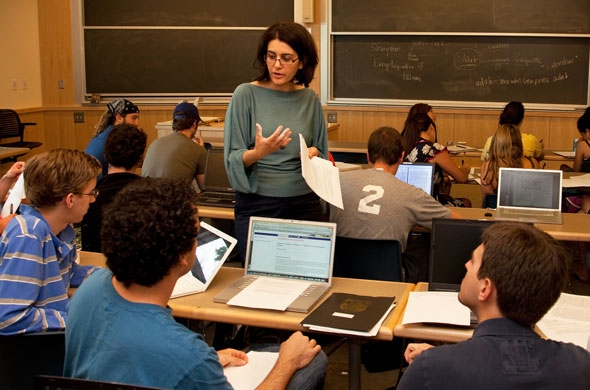 Noting that college presidents, provosts, and admissions deans nominate schools in all categories, Provost Carol Folt says, “It is always wonderful to see the excellence of Dartmouth’s faculty and students and our commitment to outstanding undergraduate teaching acknowledged.” In the overall university rankings, Dartmouth shares the No. 9 spot with Duke University and the University of Chicago. Harvard, Princeton, and Yale were ranked first, second, and third. Dartmouth had been ranked No. 11 for the past three years.

Dartmouth was recognized for its “strong focus on student success” and for its “outstanding” study abroad program. Dartmouth is among schools that offer “substantial academic work abroad for credit … and considerable interaction with the local culture.” Dartmouth has been offering Off-Campus Programs led by the College’s faculty since 1958, and ranks first among Ivy League schools for students who study abroad. More than 60 percent of undergraduate students participate in at least one of Dartmouth’s Foreign Study or Language Study Abroad programs. The College’s ranking improved in other categories, rising from third to second in alumni giving, for example, with 49 percent participation. Dartmouth also improved in areas such as small class size (classes with 19 or fewer students), student selectivity, graduation and retention rate, and faculty resources.

In the category of “great schools, great prices“ Dartmouth is No. 7. That calculation takes into account quality, as well as net cost for a student who receives the average level of need-based financial aid.

Dartmouth also placed among the top 10 national universities with the greatest economic diversity, with 13 percent of its undergraduates receiving Pell grants, most of which are awarded to students with family incomes under $20,000.