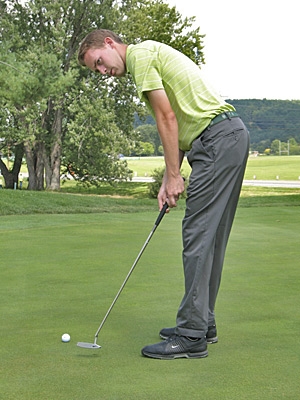 Peter Williamson ’12 practices his putting at the Hanover Country Club in preparation for the USGA U.S. Amateur Championship. (photo by Bonnie Barber)

“Peter’s going to be playing against guys who are going to golf schools, all the scholarship kids. So I’m sure in his mind he’s got something to prove,” says Parker, who finished tied for 51st at the U.S. Senior Open and was featured in The New York Times. “If he gets into match play he’ll be tough to beat. He can demoralize you with his putting.”

“Everyone laughs when I say I’m from Dartmouth, because they think, ‘Oh, he’s just another Ivy League player, he’s not that great,’” says Williamson, who will represent the Ancient Eight along with Harvard’s Tony Grillo, Yale’s Tom McCarthy, and Princeton’s Evan Harmeling in the U.S. Amateur’s field of 312 players. “But I think I can mentally beat everyone on the course. That’s what gives me that edge. So if I have my game together I can be a pretty dangerous player at the national level.”

This is the second USGA event for which Williamson has qualified this summer; in July he competed in the U.S. Amateur Public Links tournament. Ironically, the Hanover, N.H., native is having one of his best summers ever on the golf course, despite balancing the academic demands of Dartmouth’s “Sophomore Summer.” He is taking Painting 1 and Sculpture 1 to fulfill requirements for his studio art (with a focus on architecture) and geography double major, and plans to be an architect after pursuing a professional golf career post-graduation.

“It’s been an interesting summer, balance-wise. In terms of the school work, it’s pretty demanding,” says Williamson, who has been spending a lot of time working on projects in the studio. “But I felt like the Dartmouth experience of Sophomore Summer was important, and thought my D-Plan would be better if I could take junior winter off to practice, minimizing the time off between seasons. I think this is the best way to play as much golf as I can while attending Dartmouth.”

Despite not having as much time to practice this summer, Parker says he’s not surprised that Williamson, the Ivy League Rookie and Player of the Year in 2009, qualified for the U.S. Amateur. “He prepares like nobody else. And he’s probably one of the best putters in the country at any level, which really sets him apart,” says Parker. “He’s very mentally tough.” This past collegiate season Williamson never shot higher than a 76 in any round, with a low of 68, and had a stroke average of 71.6. 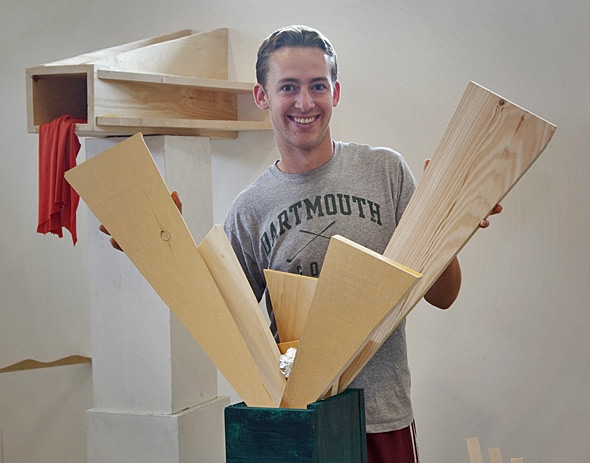 Williamson, who chose Dartmouth over Stanford and Northwestern, will be accompanied to the U.S. Amateur by his aunt Debbie Williamson ’81, and his father Doug Williamson ’85, Dartmouth Medical School ’93 (his mother Leslie, founder and executive director of the Center for School Success, can’t make the trip). Doug Williamson, a pediatrician at Alice Peck Day Memorial Hospital in Lebanon, N.H., will serve as his son’s caddy.

In the week leading up to his August 20departure, Williamson has been racing to finish his course work since he will miss the last week of the term due to the tournament. He says, “I haven’t thought a lot about the tournament because I’ve been so focused on school. But if I enter a tournament I’m in it to win it. That’s my motto. Whether or not I’m prepared, we’ll see. I hope so.”