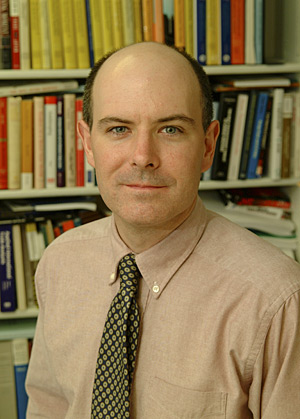 Douglas A. Irwin will lecture on “Trade Policy Disaster: Lessons from the 1930s” at Sweden’s Stockholm School of Economics on September 7 and 8. (photo by Joseph Mehling ’69)

Douglas A. Irwin, the Robert E. Maxwell ’23 Professor of Arts and Science in the Department of Economics, will deliver the prestigious Ohlin Lectures at the Stockholm School of Economics in Stockholm, Sweden, on September 7 and 8.

“It is a great honor to be asked to give the Ohlin Lectures,” Irwin says. “The previous lecturers include the most eminent international economists in the world. I’ve grown up as a trade economist learning from and admiring their work and it is a privilege to join them in this series.”

Irwin’s lectures, “Trade Policy Disaster: Lessons from the 1930s,” will be published by MIT Press in 2011 as a part of the series of Ohlin Lectures. Irwin will examine the reasons for the outbreak of protectionist trade policies during the Great Depression.

“The main reason that countries adopted such draconian anti-trade policies in the early 1930s is that governments lacked other policy instruments with which to address the Great Depression,” Irwin says. “In particular, the gold standard prevented countries from using monetary policy to ameliorate the economic downturn. Countries that left the gold standard and allowed their currencies to depreciate not only recovered more quickly from the Depression, but did not need to restrict trade in a futile attempt to ward off the slump. Protectionism and currency depreciation were substitutes for one another, but depreciation was much better for the world economy than protectionism.

“One lesson for today is that, because most countries have independent monetary policies and flexible exchange rates, they don’t need to resort to import barriers in response to an economic crisis,” he continues.