On a sultry summer day, a man waited for a professor to emerge from Wilder Hall. Students and staff members trickled out of the door, people wandered through the parking lot. Finally, a woman emerged, and the man turned. She gave him a withering look and headed for her Toyota Prius. He followed and got in the car with her. 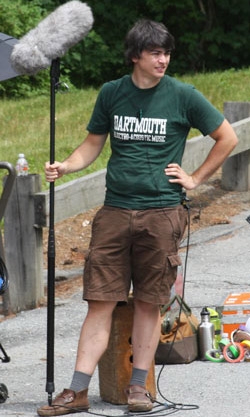 “Cut!” cried director and writer John Daschbach, who is creating his first feature film. The independent Brief Reunion, starring Joel de la Fuente, Alexie Gilmore, and Scott Shepherd, is a psychological thriller about “a successful middle-aged man whose comfortable life unravels after an old acquaintance ‘friends’ him online. The film is set in Hanover, Daschbach’s hometown.

Although Daschbach did not attend Dartmouth himself, the film has College ties. The producer is theater major graduate Ben Silberfarb ’90, and the sound designer is Patrick Barter, A&S Grad ’10, who just received an MA in digital musics. The crew also includes Production Assistant Olivia Snyder-Spak ’10, who was pleased to be involved. “I’m in New York in the fall, and the timing was perfect.

Brief Reunion is currently in post-production and scheduled to be released in 2011.