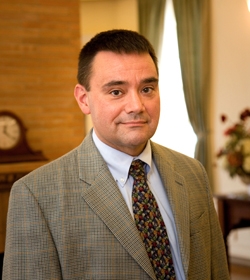 A member of Dartmouth’s administration since September 2001, Wagner first served as the College’s controller before becoming chief financial officer of Dartmouth Medical School in January 2008.

“The financial operation touches every program and member of the Dartmouth community,” says Wagner. “Our aim is to be innovative in our use of technology, efficient in the design of our financial organization and processes, and clear in the financial information and performance metrics used for planning, decision making, and reporting.”

Previously, Wagner worked for PricewaterhouseCoopers in Boston for 12 years, where he served clients in higher education, managed health care, investment management, and insurance industries. He graduated from Amherst College in 1986 with a bachelor’s in economics, and received a master’s in accounting from Northeastern University in 1987.

"The team, which includes Gail Goodness, controller, has deep experience in financial management, and each of us brings skills that complement each other well,” says Wagner. “Our role is to support the Board of Trustees, President Kim, and leaders throughout campus with understandable financial reporting and analysis, creative solutions to financial challenges, and excellent service in a well-controlled financial operation.”

Wagner will continue to support the financial operations of DMS while the search for a successor is underway.