The Reverend Leah Daughtry ’84 Will Deliver the 2010 Convocation Address

Leah Daughtry, a 1984 Dartmouth graduate known for her leadership roles in the Democratic Party, will deliver the College’s 2010 Convocation Address on September 21 as the College opens its 241st year.

Leading up to the election of President Barack Obama in 2008, Daughtry served as Chief of Staff for the Democratic National Committee (DNC), CEO of the 2008 DNC Convention in Denver, Colo., and founder of the Party’s Faith in Action initiative. Since 2002, she has been Pastor of The House of the Lord Church in Washington, D.C.

Raised in Brooklyn, N.Y., Daughtry went on to major in government and African and American Studies at Dartmouth. She says, “Dartmouth gave me a wonderful start to my own adulthood. I learned the value of educational proficiency and technical excellence along with practical experience and human compassion. The best leaders bring all these qualities with an equal measure of joy, wonder, and passion to their lives and their work.” Daughtry has served on the Board of Visitors at Dartmouth’s Rockefeller Center since 2004.

Daughtry’s own leadership and managerial expertise was most publicly displayed during the four-day DNC Convention, which ended with President Obama’s nomination acceptance speech attended by about 84,000 people and seen on television by more than 35 million viewers around the world. The entire four-day event—which for the first time began with an Inter-faith gathering at Daughtry’s suggestion—was widely considered to be a success.

Daughtry was the subject of a 2008 New York Times Magazine profile, “Can Leah Daughtry Bring Faith to the Party?” (Photo by Alessandra Petlin for The New York Times)

The daughter of a pastor, and the fifth generation of pastors in her family, Daughtry created the party’s Faith in Action initiative in 2004 to engage with people in communities of faiths. Daughtry’s work was “essential to transforming the party’s reputation,” wrote Daniel Bergner in the 2008 New York Times Magazine profile, “Can Leah Daughtry Bring Faith to the Party?” Daughtry says the outreach “helped us take our party to another level.”

“Leah Daughtry is a compassionate, engaging leader who shows what is possible when a liberal arts education is combined with practical, hands-on experience,” says President Jim Yong Kim. “She sets an extraordinary example for our students, and we are proud to claim her as a daughter of Dartmouth.”

Other speakers at Convocation include President Kim and Student Body President Eric Tanner ’11. Dartmouth will give a special welcome to the more than 1,100 students entering the Class of 2014.

In addition to her work as a preacher in Washington, D.C., Daughtry currently serves as a consultant for faith-based and nonprofit organizations. In February 2010 she traveled to South Africa to mark the anniversary of Nelson Mandela’s Walk to Freedom.  In fall of 2009 she served as a fellow at the Harvard Institute of Politics.

Daughtry held various senior posts at the United States Department of Labor during the Clinton Administration, including senior advisor to the Secretary, chief of staff, and acting assistant secretary for administration and management. She oversaw development of the department’s management programs and policies and was responsible for the department’s $35 billion budget. Daughtry also served on the Clinton-Gore 1992 Transition Team, as managing director of the 1992 Democratic National Convention, and as legislative assistant to U.S. Congressman Edolphus “Ed” Towns. 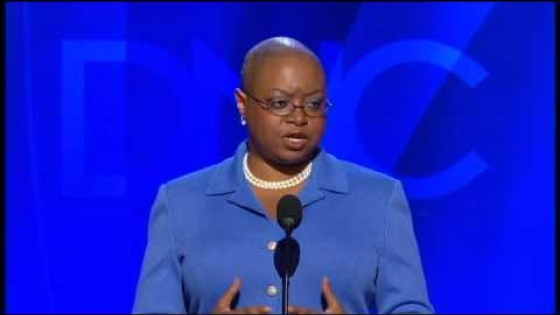 Remote video URL
At the opening of the 2008 Democratic National Convention, Leah Daughtry said, “As the daughter of 4 generations of pastors, and a pastor myself, I am particularly honored to be here and serve as host of this Convention.”
Written by
Steven Smith
Share this
FacebookTwitterEmail
In the News