Dartmouth undergraduate and graduate students have been gaining in-depth knowledge of the incarceration system this summer term through “Inside Out: Prison, Women and Performance,” a community-based learning course taught by Ivy Schweitzer, professor of English and women’s and gender studies, and Pati Hernandez, founder of the Telling My Story project. Students and the female prisoners they’ve been working with at the Sullivan County House of Corrections will stage a collaborative performance on August 19 and 20 at the prison in Unity, N.H. 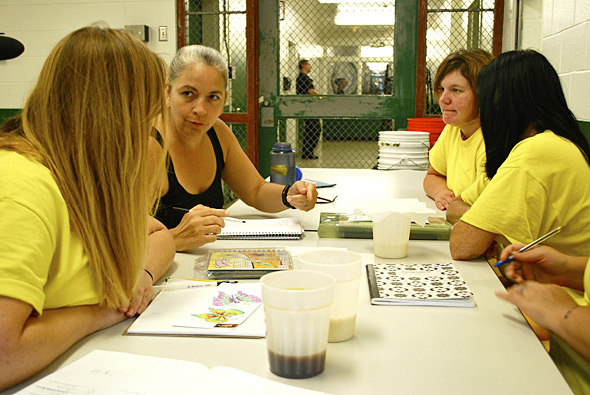 Pati Hernandez (black shirt), facilitator of “Telling My Story,” working with the women prisoners at Sullivan County House of Corrections in Unity, N.H. Dartmouth students and prisoners will stage a collaborative performance on August 19 and 20 at the prison. (photo by Patricia Lee ’12)

“The ostensible goal of the course is the creation of an original theater piece based on the women’s lives,” says Schweitzer. “The deeper goal of the course, however, is movement: on the one hand, the creation of a platform for the expression of the women prisoners’ unheard voices. On the other hand, by listening closely to these voices, confronting their privilege, and working across differences, the students move from the divisions produced by complacency and social ignorance to a new understanding. The voices of the women prisoners drive this double movement that brings everyone, including the audience, to their deepest humanity.”

Award-winning filmmaker Signe Taylor has been filming the course this summer for an hour-long film she’s directing and producing, Telling My Story: A Documentary. “This documentary will chronicle what occurs when members of two societal extremes are brought together to craft an original play about women in prison,” says Taylor, who received support from the Bildner Endowment for Human and Intergroup Relations at Dartmouth, among others. “And with the number of women in prison increasing at an alarming rate, 70 percent of whom were incarcerated for non-violent drug, property, or public order offenses, it’s crucial for Americans to understand who is in prison and why, and whether incarceration is the solution.”

The performances will be held on Thursday, August 19, and Friday, August 20, at 6 p.m. at the Sullivan County House of Corrections in Unity, N.H. The event is open to the public. Email Meagan Leddy-Cecere at meagan.a.leddy-cecere@dartmouth.edu if you wish to attend a performance.