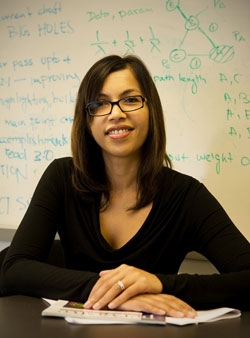 This is the inaugural year for the fellowship, which recognizes early- and mid-level career scientists who work in areas of critical importance to the nation and the planet. The chosen 18 fellows exemplify the ability to incorporate social causes into their research and communicate these results to a broader audience.

“As scientists we are good at communicating our research and innovation to our peers and our scientific community,” says Choudhury. “But for our work to have a broader impact, I think it is important to be able to communicate effectively across scientific disciplines and be able to highlight how our work can positively impact society.”

Since joining Dartmouth in 2008, Choudhury has taught a range of undergraduate and graduate courses and served as an advisor for several student theses. In addition to her extensive one-on-one work with undergraduate and graduate students, Choudhury directs the People-Aware Computing group, which works on developing machine learning techniques for systems that can reason about everyday human activities.

Technology Review named Choudhury to the 2008 TR35, an annual list that recognizes top innovators under the age of 35, for work reimaging social networks using her “Reality Mining” system.

Choudhury, along with Andrew Campbell and Rajeev Raizada, recently received a National Science Foundation (NSF) EAGER grant for further research on the NeuroPhone. In 2009, she was awarded the NSF CAREER award, which supports junior faculty who exemplify the role of teacher-scholar.

Description
Director of Creative Writing Peter Orner’s Still No Word From You: Notes in the Margin gets a short review, which calls him “a highly lauded author whose writing, in both fiction and nonfiction, is an act of wizardry.”
The New York Times
Videos