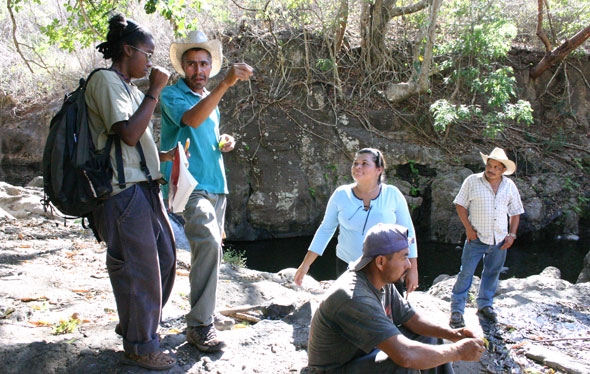 Kiva Wilson ’04 (left), Peace Corps diversity outreach specialist, served as a Peace Corps volunteer in El Salvador. She is pictured with representatives of a local community development organization as they plan a water project in San Fidel, El Salvador. (photo courtesy of the Peace Corps)

The panel’s speakers are:

Kiva Wilson ’04, Peace Corps Diversity Outreach SpecialistAs a Peace Corps volunteer, Wilson assisted El Salvador residents in developing various projects, including an organic garden and a water system. In her new role at the Peace Corps, Wilson aims to increase the diversity of the cultural backgrounds among volunteers.

The panel was organized by staff at the Tucker Foundation and Caitlin Ardrey ’13, a government major, and Alison Oberg ’13, an Asian and Middle Eastern Studies major.  The two students will also be singing with the Dartmouth Rockapellas, an all-female a cappella group, during a performance prior to the panel.

Dartmouth is a nationally ranked Peace Corps “Top College” with 17 alumni currently serving overseas.  Since the Peace Corps was founded in 1961, more than 600 Dartmouth graduates have served as volunteers overseas. John A. Rassias, the William R. Kenan Professor and founder of the Rassias Foundation, helped to develop Peace Corps language training programs.

While the Peace Corps was created in 1961, President John F. Kennedy delivered the speech that inspired the agency on October 14, 1960. The Peace Corps will be recognizing its 50th anniversary throughout 2011.