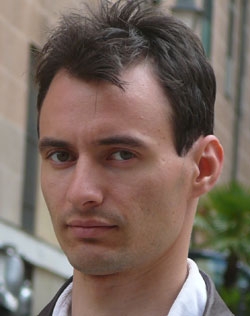 Giulio Genovese, who holds a PhD in mathematics from Dartmouth, is the lead author of a study identifying variants in the APOL1 gene that confer a greatly increased risk of kidney disease in African Americans. The study was published in the August 13, 2010, issue of Science. It initially appeared in the July 15 issue of Science Express, the journal’s advance online publication.

“This story is remarkably similar to sickle cell anemia with a few important differences,” says Genovese, who earned his doctorate in 2010. Genovese and his advisor, Professor of Mathematics Daniel Rockmore, worked with Martin Pollak, a geneticist at Harvard Medical School and Beth Israel Deaconess Medical Center. In his final year at Dartmouth, Genovese was part of a collaboration between Rockmore’s lab at Dartmouth and Pollak’s lab at Harvard, where the two groups studied new techniques for the analysis of genetic data.

APOL1 appears in two variant forms. When people inherit one mutant copy of the gene, they are resistant to a Trypanosoma subspecies which causes African sleeping sickness. However, if two mutant copies of APOL1 are inherited, the risk of kidney disease is highly elevated. The APOL1 genetic variants protect against the parasite that causes sleeping sickness, just as the sickle cell mutation fights against the parasite responsible for malaria.

Since Genovese was not a geneticist by training, he says it took time to better understand the entire spectrum of human variation within the human genome. “I had to make sense of and interpret data we had in the lab, integrating it with publicly available data online to see the whole picture,” he says.

Genovese notes that his findings lead to new questions, such as why the loss of function in APOL1 leads to kidney disease, why natural selection devised two different variants in APOL1, and when and where these variants arose in history.

The most interesting question, however, says Genovese, involves looking at the long term: “How many similar stories of genetic diseases related to parasite infections will be uncovered in the next five years? There is reason to believe this is just one instance of many ‘quick fixes’ nature has engineered to cope with the fast environmental changes human beings have gone through in the last 10,000 years.”