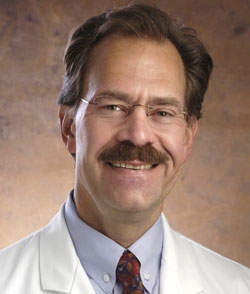 Souba comes to Dartmouth from The Ohio State University, where he served as Dean of the College of Medicine and as Vice President and Executive Dean of Health Sciences. He holds an MD from the University of Texas Medical School in Houston, an ScD in nutritional biochemistry from the Harvard School of Public Health, and an MBA from Boston University.

“It is a pleasure to welcome Chip Souba to Dartmouth,” Kim said in making the announcement. “He is highly regarded as a cancer surgeon, as a basic scientist, and as a talented administrator and leader. He is known for his ability to partner and to transform. We are thrilled to have him join us as Dean of Dartmouth Medical School at such a critical time in the trajectory of medical research and training nationally.”

Souba (pronounced Show-buh), one of the top surgical oncologists in the country, is also a scientific researcher whose studies on amino acid metabolism, as related to the development of cancer of the intestine, have been funded by the National Institutes of Health and reported in over 300 peer-reviewed scientific articles. The editor of two books and author of another, Dr. Souba serves on the editorial board of numerous journals and has lectured throughout the world.

As Dean, he will report to Dartmouth’s Provost, Carol Folt, who said of Souba: “Not only is he an outstanding physician, scientist, educator, and dean, he has also written extensively on the topic of effective leadership, with a focus on improving academic medical centers. His interests cross all areas at Dartmouth, and I am looking forward to working closely with him as we enter into an intense phase of strategic planning for Dartmouth.”

Souba earned his medical degree in 1978 and then trained as a resident in surgery at the University of Texas in Houston. Following his residency, he completed fellowships at Boston’s Brigham and Women’s Hospital and Dana-Farber Cancer Institute. He went on to earn his doctor of science degree at Harvard in 1984 and then held a fellowship in surgical oncology at MD Anderson Hospital and Tumor Institute.

“I am very excited to be joining the Dartmouth community and serving in this capacity,” said Souba. “The Dartmouth Medical School’s superb faculty, forward-thinking and collaborative leadership, and long-standing excellence in basic science and outcomes research positions Dartmouth to be at the forefront of transforming health care and training the next generation of physicians and leaders in medicine and biomedical science.”

Souba’s first faculty position was at the University of Florida, where he quickly rose to become Professor of Surgery. He moved to Boston in 1993 to become Professor of Surgery at Harvard Medical School and Chief of Surgical Oncology at Massachusetts General Hospital. In 1999, he was named Waldhausen Professor and Chair of the Department of Surgery at the Penn State College of Medicine and Surgeon-in-Chief at Hershey Medical Center. He became Dean of The Ohio State University College of Medicine in 2006.

Souba hails originally from Caracas, Venezuela, where he lived until the age of 15, when he and his family moved to New Jersey. He earned a bachelor’s degree in chemistry from Muskingum College in Ohio in 1975. He and his wife, Lynne Hayes Souba, are the parents of a son and a daughter.

Souba succeeds Dr. William Green, who has been Dean of Dartmouth Medical School since January 2008. “Professor Bill Green has been highly effective as dean,” said Provost Folt. “DMS has thrived, even during a period of financial uncertainty, under his leadership, and he and the DMS leadership are committed to ensuring Dr. Souba’s transition will be smooth and efficient. Following Chip Souba’s arrival, Bill Green plans to return to the key role of Chairman of the Department of Microbiology and Immunology. All of us throughout the College and Dartmouth-Hitchcock community are deeply grateful to Bill for his selfless and capable service to the medical school at this crucial time.”

The appointment follows a national search that began in January 2010 and was led by Dr. Alan I. Green, the Raymond Sobel Professor and Chair of the Department of Psychiatry and a Professor of Pharmacology and Toxicology. ”The search committee was extremely impressed by the depth and quality of the applicant pool for the Deanship,” said Green. “We’re very pleased to have participated in the recruitment of Dr. Souba, someone we’ve gotten to know and respect enormously. He’ll be an outstanding Dean.”

Dartmouth Medical School is a component of the Dartmouth-Hitchcock health system, a national leader in evidence-based and patient-centered care. Dr. James Weinstein, co-president of Dartmouth-Hitchcock and director of The Dartmouth Institute for Health Policy and Clinical Practice, said Souba’s experience as a physician and researcher, coupled with his understanding of management and business practices, would be a great asset for the medical school and medical center. “Health care is in a period of change and transformation,” Weinstein said. “A leader like Dr. Souba who understands the complexity of medicine from several vantage points will be critically important as we work together across Dartmouth to reconfigure and improve the delivery of care.”

Dartmouth Medical School’s more than 2,000 faculty members are known for their research in the basic, translational, and clinical sciences, as well as in the arena of health policy, outcomes, and the delivery of health care. The school also has been recognized for the high quality of its teaching and its close faculty-student relationships. Researchers at DMS received more than $115 million in funding in the 2009 fiscal year. DMS is also home to the internationally recognized Dartmouth Institute for Health Policy and Clinical Practice (TDI).

DMS has a strong commitment to medical outreach and international service. Eighty percent of first- and second-year students are involved in volunteer activities, many serving local and regional populations in need, and numerous students participate in service learning trips to such places as Appalachia; Washington, D.C.; and Native American reservations in the Midwest and West. DMS also has formal affiliations with or programs in such countries as Tanzania, Kosovo, Vietnam, and Nicaragua, in addition to many other global collaborations.

The medical school enrolls approximately 350 students in its MD, MD-MBA, and MD-PhD programs; 310 graduate students in the biomedical sciences; and 120 students in TDI’s MPH, MS, and PhD programs. Admission to DMS is highly competitive, with more than 5,000 applications each year for about 90 spots in the MD program.

Dartmouth Medical School is part of Dartmouth College, which was founded in 1769 and has approximately 4,100 undergraduate and 1,700 graduate students, including those at DMS. Dartmouth Medical School itself was founded in 1797 and is the nation’s fourth-oldest medical school. In addition to the medical school, Dartmouth is home to 20 graduate programs in the arts and sciences; the Thayer School of Engineering, founded in 1867, one of the nation’s first professional schools of engineering; and the Tuck School of Business, founded in 1900, the first graduate school of management in the world.