Dartmouth researchers were awarded $15.6  million during April, including $2.8 million in new and competing awards. View the complete list of awards, as reported by the Office of Sponsored Projects. Here, Dartmouth Now spotlights three investigators and their work. 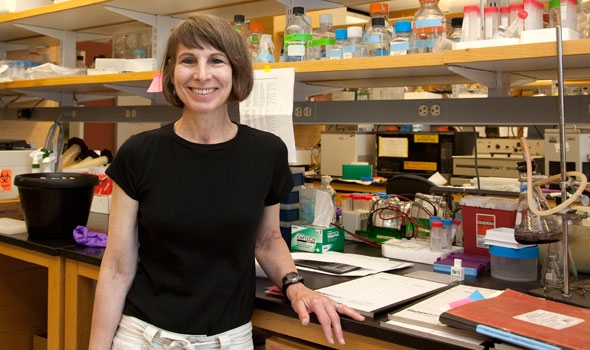 Nancy Kuemmerle studies liposarcomas, rare tumors that rely on a supply of fat for their growth. (photo by Joseph Mehling ’69)

Toxic presence: Liposarcomas depend on a supply of fat for their growth. Both the protein Spot14 and the enzyme lipoprotein lipase are expressed at relatively high levels in liposarcomas. These rare tumors can only be cured when detected very early and completely excised surgically.

Hidden cause: Kuemmerle’s work will address the major gap in understanding this key metabolic feature of aggressive tumors. “It may be that it is lipid metabolism that fuels the aggressive, metastatic behavior of these—and perhaps other—tumors,” she says. “The precise biochemical function of Spot14 is not known, and we plan to define it.”

Teamwork: Kuemmerle’s work evolved from research she originally conducted as a Dartmouth-Hitchcock Medical Center fellow with Professor of Medicine William Kinlaw. The project’s scope extended when she began collaborating with Burt Eisenberg, deputy director of the Norris Cotton Cancer Center. 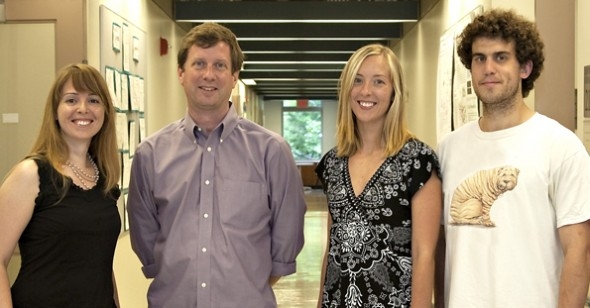 GAANN (Graduate Assistance in Areas of National Need) grants are funded by the Department of Education to increase the number of graduate students in particular areas of science. Kull is the principal investigator on the grant, which will support three students for the next three years. This year’s fellows are, by area of study, are:

Theoretical Polymer Chemistry: Elizabeth Clark works in the laboratory of Jane Lipson, the Albert W. Smith Professor of Chemistry. She focuses on applying lattice theory to study and predict the properties of solutions and blends of polymers.

Inorganic Chemistry: Matt Cain, who works in the laboratory of Professor of Chemistry David Glueck, researches copper-catalyzed phosphorus-carbon bond formation. The selective formation of P-C bonds is critical in the pharmaceutical industry since it can result in the synthesis of cheaper and purer drugs.

Biophysical Chemistry: Jennifer Taylor works in Kull’s laboratory. Her work has focused on the characterization of a protein involved in cholera, AphB. The goal of Taylor’s project is to structurally characterize the complex of AphB with DNA in order to develop better treatments for cholera. 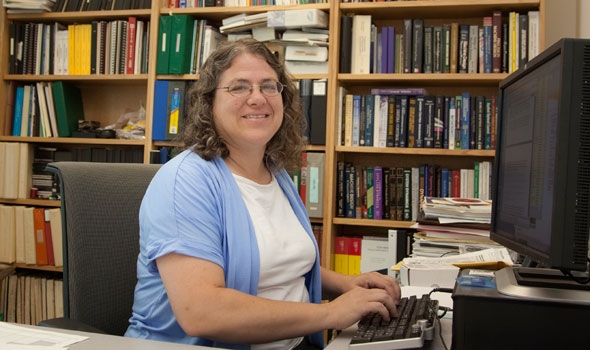 New ground: Ray and her team would like robots to be able to operate autonomously in unstructured (off-road) terrain without getting stuck. “We are developing approaches by which robots can use on-board sensors—wheel speeds, ground speed, motor currents, and accelerations—“to ‘feel’ the terrain underfoot,”she says. “It is somewhat like hiking on a trail and coming across a muddy section. You might dip a toe or stick into the mud to determine whether a firmer substrate is a half-inch below the surface or several inches below, but you cannot necessarily determine whether you will sink by simply looking at the surface.”

Mobility: “Several years ago, the need for non-visual cues to mobility assessment became apparent as we began to deploy robots to polar regions (beginning with our “Cool Robot” project sponsored by the National Science Foundation in 2004.) When contrast is low, as it is in snow-covered terrain, one needs another means to assess mobility,” says Ray. “In 2009, graduate student Eric Trautmann began to develop machine-learning approaches to mobility assessment, and this direction looked promising. The Jet Propulsion Laboratory project builds on that work.”