The College’s Class of 2014, made up of 1,139 individuals, officially became Dartmouth students in a Matriculation ceremony presided over by President Jim Yong Kim on September 15, 2010. Representing a variety of cultures, economic backgrounds, and geographic regions, the ’14s come from a pool of 18,788 applicants—the largest in the College’s history. 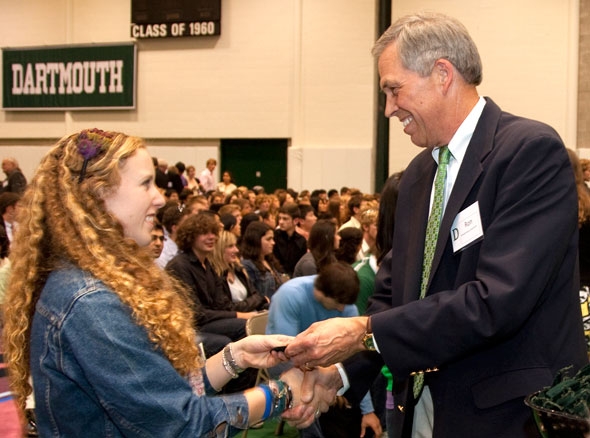 Ronald Schram ’64 (right) gives Kellie MacPhee ’14 a Class of 2014 pin as he welcomes her to Dartmouth during the Matriculation ceremony on September 15. It’s a Dartmouth tradition to have members of the 50th anniversary alumni class—in this case the Class of 1964—greet the incoming students. MacPhee, who hails from Encinitas, Calif., is considering studying math and physics at Dartmouth. Schram is Chair of the Board of Visitors of the Nelson A. Rockefeller Center at Dartmouth, a former Trustee, and President of the Class of 1964. (photo by Joseph Mehling ’69)

Of those ranked by their high schools, 90 percent were ranked in the top 10 percent of their class, and of those, 32 percent were valedictorians and 9 percent were salutatorians. The class’s mean SAT scores were 718 critical reading, 729 math, and 727 writing.

Ten percent of the ’14s are the first in their families to attend college, and 44 percent received scholarships, with the average award climbing to over $36,500.  In total, the class is receiving over $18.5 million in scholarship assistance from Dartmouth.

Eight percent are from outside the United States, representing 43 countries. They speak 34 different languages, from Haitian-Creole to Navajo. Nearly 37 percent of the students identify themselves as either African American, Asian American, Latino, Native American, or multiracial.

Members of the class come from 48 states across the country, from public (55 percent), independent (39 percent), and parochial (6 percent) high schools. Some come from a Dartmouth family—14 percent are sons or daughters of Dartmouth alumni.

While diverse in many ways, these students are bound by their enthusiasm for Dartmouth, says Maria Laskaris ’84, dean of admissions and financial aid. “They were drawn to Dartmouth not only for its excellent academic opportunities but for its close-knit community,” says Laskaris. “They want a multifaceted educational experience, and understand that their learning will take place both in and outside the classroom.” 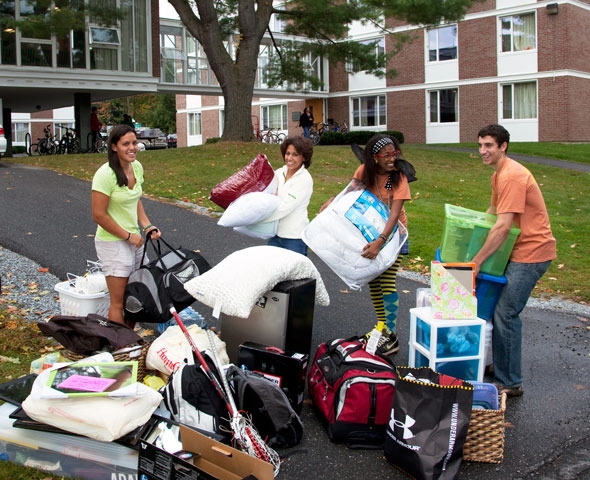 Anjalie Christie ’14 (left) moves in to the Choates with the help of her mother (center) and UGAs (residence hall undergraduate advisors) Hannah Giorgis ’13 and Kyle Heppenstall ’13 (right), on September 15, 2010. (photo by Joseph Mehling ’69)

Laskaris notes that many students cited opportunities such the Rockefeller Center’s leadership programs, the Hopkins Center ensembles, the Dickey Center’s international programs, the College’s traditions in athletics and the out-of-doors, and the Tucker Foundation’s service programs as key to their college experience.

“These students are remarkably accomplished and full of potential,” she says. “They want to learn how to realize their aspirations and change the world.”