Report Advises Policymakers on Shipping in the Arctic

As the climate warms and global commerce grows, the possibility of an Arctic shipping route becomes more likely. A new report, “Considering a Roadmap Forward: The Arctic Marine Shipping Assessment,” the result of a collaboration between Dartmouth College, the University of Alaska Fairbanks (UAF), and the University of the Arctic, offers policymakers worldwide guidance for navigating the political and practical ramifications of shipping in the Arctic. 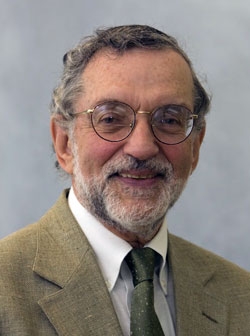 Ken Yalowitz, director of the Dickey Center for International Understanding, believes one of the most important issues resulting from climate change is how to manage shipping in the Arctic. (photo by Joseph Mehling ’69)

Published and edited by UAF, the report details the recommendations that came from a workshop held there in October 2009 as part of the University of the Arctic’s Institute for Applied Circumpolar Policy. Former U.S. Ambassador Kenneth Yalowitz, director of Dartmouth’s Dickey Center for International Understanding co-chairs the Institute.

“The future of shipping in the Arctic is one of the most important issues resulting from climate change in the North,” said Yalowitz. “The conference and the report are major achievements for promoting an interdisciplinary examination of major Arctic issues and for recommending options to policymakers.”

The 24-page report takes the key AMSA recommendations and provides a list of action items to consider as well as offering dozens of proposed actions, many of which will require public or private funding. Among the highest-priority policy issues are:

Ross Virginia, director of the Dickey Center Institute for Arctic Studies, views this report on the future of shipping in the Arctic as a case study for approaching many other environmental problems in the North. (photo by Joseph Mehling ’69)

”The report highlights the ongoing need to couple state-of-the-art climate and environmental science with the social sciences to provide policy makers with timely and actionable information on which to reach policies that ensure a sustainable future for the Arctic,“ said Ross Virginia, professor of environmental studies and director of the Dickey Center Institute of Arctic Studies at Dartmouth. ”This report on the future of shipping in the Arctic is a case study for approaching many other environmental problems in the North."