Marcelo Gleiser, the Appleton Professor of Natural Philosophy and professor of physics and astronomy, recently participated in the One Day University program in New York City. 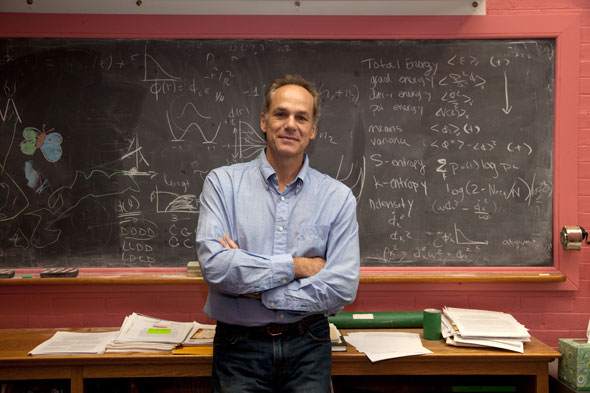 Gleiser’s lecture, “The Philosophy of Everything: Life in an Imperfect Universe,” examined the relationship of humans and the cosmos. The talk poses the question, “How can we understand our humanity in such a vast universe?” That topic, he notes, is also central to his Physics 1 course at Dartmouth.

One Day University, an adult education program, draws its lecturers from the faculties of leading colleges and universities, relying on student evaluations and teaching awards to identify “the top one percent” of academics in the United States.

Gleiser has previously participated in One Day University programs held in Los Angeles and Boston. He finds his appearances to be similar to his experiences speaking to Dartmouth alumni. One Day University participants “are very interested and very engaged,” he says. “I think it’s a wonderful experience because they are really paying attention and want to understand these issues.”

His lecture was based on his most recent book, A Tear at the Edge of Creation (Free Press, 2010), which addresses, says Gleiser,  “in a very accessible way, the intersection of science and religion and the meaning of being human in a vast cosmos.” He and Daniel Rockmore, the John G. Kemeny Parents Professor in Mathematics and professor of computer science, were recently awarded a $2.5 million grant from the National Science Foundation in support of a program which brings science education to rural libraries. Gleiser also took part in this year’s Faculty Chalk Talk program, a series of lectures at Dartmouth sponsored by Alumni Continuing Education.