The grant is to further develop the neural phone, a project that enables neural signals to control mobile phones through the use of inexpensive, off-the-shelf equipment. The project is the first time that an inexpensive wireless electroencephalography (EEG) headset has been successfully integrated with a commercial smartphone to drive mobile applications. 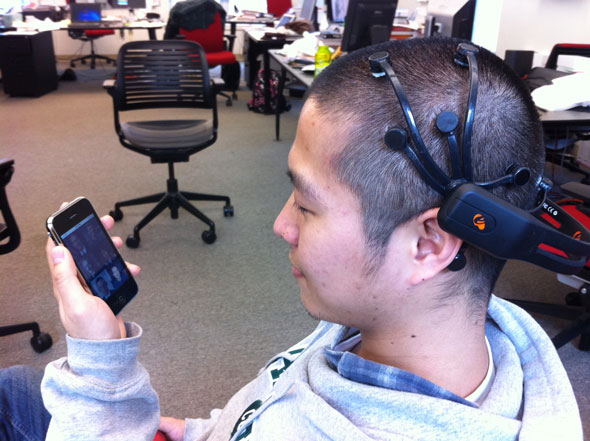 Xiaochao Yang, a PhD student in computer science, uses the neural phone. The phone’s application presents the user with a series of photographs. When the preferred photo is highlighted, the user’s P300 neural signals are transmitted to the iPhone through the EEG headset, which then dials the contact. (photo by Shaohan Hu)

The neural phone elicits neural signals in response to photographs of contacts displayed on a phone and calls the chosen contact without the user ever touching the phone. The device streams raw EEG signals from a neural headset to an iPhone, which uses machine learning techniques on the phone to classify a P300 neural signal to make the call.

A number of graduate and undergraduate students contributed to the development of the neural phone. Among them was Matthew Mukerjee ’10, who worked on the neural phone as his undergraduate honors thesis in the Department of Computer Science. Before beginning graduate school at Cornell University, Mukerjee presented the neural phone in New Dehli, India, at the ACM SIGCOMM’s MobiHeld workshop. “It was a great honor to be able to represent Dartmouth at such an event,” he said. The group also created a short video to demonstrate how the phone works.

The research team, whose work with the neural phone has been well received in popular technology blogs and magazines such as Popular ScienceandThe Atlantic, is spearheading new applications in healthcare, education, and social interactions where smartphone-sensing technology is the central systems component.

More broadly, Campbell foresees that new smartphone sensing applications will impact people’s everyday lives. “You can start seeing the phone as the new microscope, as it were, in this area of well-being and health,” says Campbell. “It could be used just personally, for you, or those streams can be fed to a personal care provider or a physician.”

Mukerjee believes the intersection of academia and industry that the neural phone demonstrates is crucial. “We’ve basically shown, ‘Hey, brain-controlled phones are feasible,’” says Mukerjee. “Smartphones are already used everywhere. If industry and academia can work together and provide each other with their advancements on peripherals like EEG headsets, I think that some part of neural phone will surely be integrated as a ‘must-have’ item in the future.”