The Dartmouth Rugby Football Club will celebrate its 60th anniversary this weekend at the state-of-the-art Corey Ford Clubhouse. With over 200 guests expected, the event will unite six generations of Dartmouth rugby players for three days of celebration, matches, and fellowship. 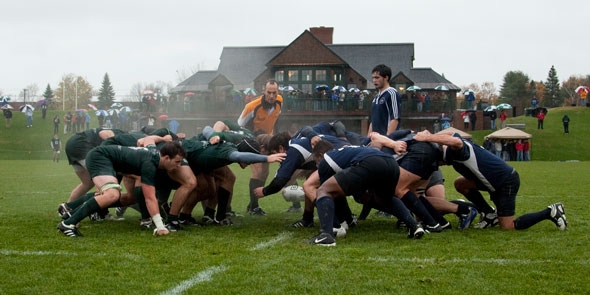 The 2009 Dartmouth Rugby Football Club vs. Yale on Brophy Field at the Corey Ford Rugby Clubhouse. (photo by Joseph Mehling ’69)

“Dartmouth’s a family, and rugby is a family within a family,” says Ted Bracken ’65, chairman of the 60th anniversary planning committee. “Once you play the game, it is something that becomes a part of you. It’s a family affair.”

The festivities will kick off Friday night with a reception at the clubhouse and include a gala dinner celebration on Saturday evening under a big-top tent. The weekend’s events will also feature the unveiling and dedication of the new “1959 California Touring Side Scoreboard” at the team’s first fall home game on Saturday. The new scoreboard will enable fans to follow the exact time of the game, which runs on a continuous clock.

“We love playing on [Brophy] field because of the atmosphere and the crowd, and when the crowd is into the game, it’s great.  [The new scoreboard] more legitimizes the spectator experience,” says team captain Tommy Brothers ’11. 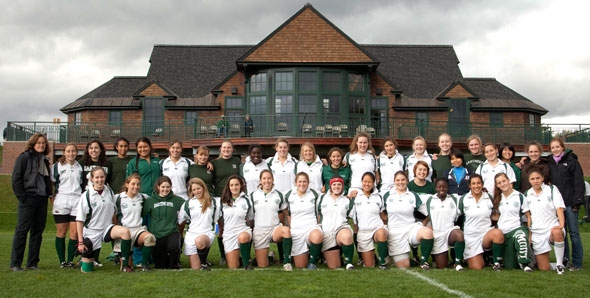 The men’s and women’s teams will be certain to have enthusiastic crowds for their matches against Brown and Yale, respectively. The men’s team aims to repeat this fall as Ivy League champions in preparation for their spring entrance into the newly formed college Division I Premier League. This league comprises the nation’s top regional rugby teams and is aimed at fostering national competition in anticipation of rugby becoming an Olympic sport in 2016. The women’s team, which has made nine appearances in the Division I collegiate U.S. National Tournament, approaches the weekend following a win against the University of Connecticut in its opening league match.

The men’s game begins on Saturday, October 9, at 11:30 a.m., and the women’s game follows at 1:30 p.m. A full schedule of the weekend’s events are available on the team’s 60th anniversary website.