“It’s about you working on a specific problem and having a sense of direction, knowing what it could be and where you want to go with it,” Frank Stella told students from Enrico Riley’s fall term “Painting I” class who viewed the Hood Museum of Art’s “Frank Stella: Irregular Polygons” with the celebrated abstract artist in mid-October. This special tour was part of Stella’s residency as a Montgomery Fellow from October 17 to October 24. Additionally, the 2009 National Medal of Arts recipient met with art history students, participated in a sculpture class and an additional painting class, critiqued the works of studio art students and teaching assistants, and held a public discussion. 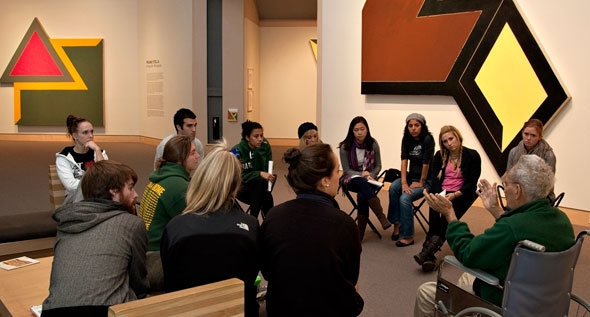 “Frank Stella is one of the greatest artists of the postwar period, a creator who has re-envisioned the possibilities of pictorial space and redefined the meaning and trajectory of abstract art since the late 1950s,” says Richard Stamelman, executive director of the Montgomery Endowment, noting that Stella was the youngest artist ever to have a career retrospective at the Museum of Modern Art. “Our students profited from his ‘eye,’ from his belief that in order to learn about painting and to learn how to paint, one needs to learn how to look at painting.”

Stella’s residency as a Montgomery Fellow coincided with the Hood’s exhibition of Irregular Polygons, 11 monumental Stella compositions from the mid-1960s named after small New Hampshire towns—Chocorua, Sunapee, Tuftonboro, Conway—and his most recent work, Polychrome Reliefs. Exhibition curator and former Hood Director Brian Kennedy, now director of the Toledo Museum of Art, led the public conversation with Stella about his work, the mechanics of his artistic creation, and his philosophy of art.