Professor Anne Kapuscinski and a team of six students spent summer term examining how a common food fish might address a big question. “How can we design systems that are integrated and that we hope will meet renewable energy needs, food needs, and use water sparingly?” she asks. 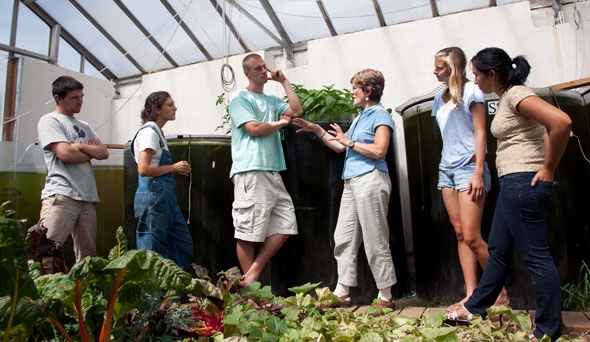 Kapuscinski, the Sherman Fairchild Distinguished Professor in Sustainability Science, and the students explored this question using polyculture aquaponics and the fish Oreochromis niloticus, a species of tilapia that is farmed worldwide. Polyculture aquaponics is a system where common farm crops and aquatic organisms coexist in a complementary environment. This system provided the group a foundation for its integrated food and energy systems research, which took place in the greenhouse at the Dartmouth Organic Farm.

In the research, Kapuscinski focused on three “life essentials” she believes people often take for granted: sufficient water, sufficient renewable energy, and sufficient nutritious food. The project integrated the three in a number of ways: minimizing water consumption through the use of static water, using solar energy, raising fish, and growing produce on floating rafts in the tanks. The roots of the produce used nutrients from the waste of aquatic animals and water from the tanks to thrive.

The tanks featured several species in order to establish the polyculture aquaponics system, Kapuscinski notes. Tilapia is easy to raise; the bull head is a native scavenger that forages the bottoms of the tanks; bluegill is an omnivorous native species similar in appearance to tilapia. The golden shiner, a commercial baitfish, was included as an alternative native species that grazes on algae within the tanks. It is also a fish that can be eaten whole. “Micronutrients are often deficient both among many poor people in developing countries and, ironically, sometimes among well-off people who are eating foods that are overly processed,” Kapuscinski says. “So if you eat the whole fish you’re getting vitamin A from the eyes, calcium from the bones, as well as a few other minerals,” she explains.

Tyler Pavlowich, a PhD student in ecology and evolutionary biology, and John Lawlor ’09 led the research group composed of Emily Liu ’12, Jenna Musco ’11, Molly Wilson ’13, and Mayra Chichakly of Manaus, Brazil. The group collected water samples once a week to record water chemistry, observed the growth and survival of edible animals and plants, and examined colonization by microorganisms. 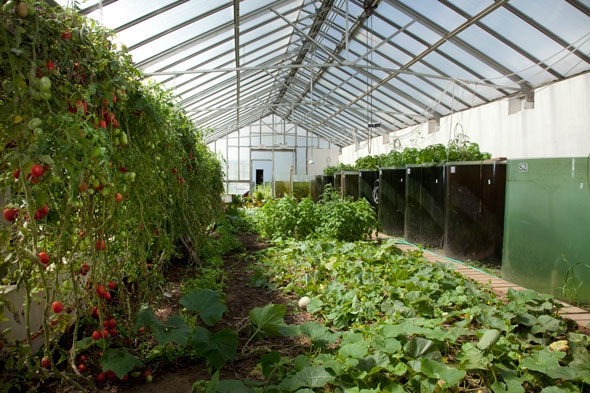 Tilapia tanks, part of a sustainability research project, became a welcome part of the scenery in the Organic Farm’s greenhouse. (photo by Joseph Mehling ’69)

Though the inaugural phase of the project is complete, it remains “important to Dartmouth in that it will be a jumping-off point for research on sustainable, integrated food-energy systems,” says Pavlowich. “In the few months that we had the project going, we have met many students who are very excited about aquaculture and want to get involved with us.”

Pavlowich says research will continue with aquaponics and natural feeds for aquaculture. The group plans to work with systems that integrate clean energy technologies that combine aquatic and terrestrial food production, an especially interesting option for addressing issues in sustainability, he notes.