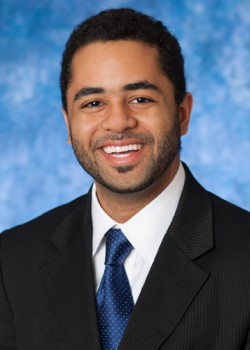 Anise Vance ’11 will study religious segregation and issues of religious identity in Belfast, Ireland, while he pursues an MA in geography at Queen’s University Belfast as a 2010-11 Mitchell Scholar. (photo by Carol Clayton)

Anise Vance ’11 has been chosen by the US-Ireland Alliance as a George J. Mitchell Scholar for the 2011-12 academic year. Vance, a senior from Weston, Mass., is one of 12 students selected nationally to pursue a year of post-graduate study at universities on the island of Ireland.

Vance will pursue an MA in geography at Queen’s University Belfast. A Dartmouth Senior Fellow and a geography major, he is currently preparing his fellowship thesis based on data he gathered this past summer researching the links between racial identity formation and residential segregation in Hartford, Conn. Vance is also a Mellon Mays fellow.

“This is a humbling experience,” says Vance. “I am honored and thrilled to be chosen as a Mitchell Scholar. I feel grateful to all the people whose involvement in my academic career and in my life made this achievement possible. More than anything, this scholarship is a testament to how lucky I am to be surrounded by supportive and phenomenal professors, college administrators, and mentors who have done more for me than I had a right to ask, as well as an expert Scholarship Advising Office, friends who are always there, and family that I could not admire more.”

Vance intends to take his study of Belfast beyond the classroom. “In addition to taking courses,” he says, “I plan on researching the relationship between space and identity in Belfast,” in terms of religious segregation, religious conflict, and religious tranquility, and physical manifestations of personal identity—“the body as space.”

“My time in Belfast will form the centerpiece of my future academic studies,” Vance explains. “After completing the MA, I will be applying to PhD programs in sociology in the United States. I hope to continue studying the relationship between spatial boundaries and identity, linking structure to individuals and complicating our picture of a cleanly and clearly defined society.” (As a Dartmouth junior, Vance was selected as 2010 Beinecke Scholar, one of 20 students nationwide who will receive support for future graduate study.)

At Dartmouth, Vance has served as an Undergraduate Advisor and Dean’s Office student consultant. He was a member of the Afro-American Society’s Executive Board, sat on the Inter-Community Council, was part of the Multi-Faith Council, and served as the Student Director of the Office of Religious and Spiritual Life at the Tucker Foundation. Vance is most proud of his involvement in the Summer Enrichment at Dartmouth (SEAD) program for under-resourced high school students and in Dartmouth’s First-Year Student Enrichment Program for first-generation college students. He is also active in theater and poetry programs on campus.

Vance joins Ibrahim Elshamy ’09 in the ranks of Mitchell Scholars recently chosen from Dartmouth. The George J. Mitchell Scholarship program was created more than 10 years ago by Trina Vargo, former foreign policy adviser to Senator Ted Kennedy. The scholarship was named in honor of Senator Mitchell’s role as chairman of the Northern Ireland peace talks. The program quickly became established as one of the most sought-after in the country. Scholars must have strong records of academic achievement, service and leadership. For more information on the Mitchell Scholarship, see Dartmouth’s National Fellowships and Scholarships website.