Dartmouth is the #1 Ivy for Study Abroad

If living and studying in a different country contributes to international understanding, Dartmouth students are some of the most globally aware in the nation. According to the Institute of International Education’s 2010 “Open Doors” report released today, 59 percent of Dartmouth undergraduates studied abroad in 2008-09, the most of any Ivy League school and sixth among all U.S. doctorate-granting institutions. 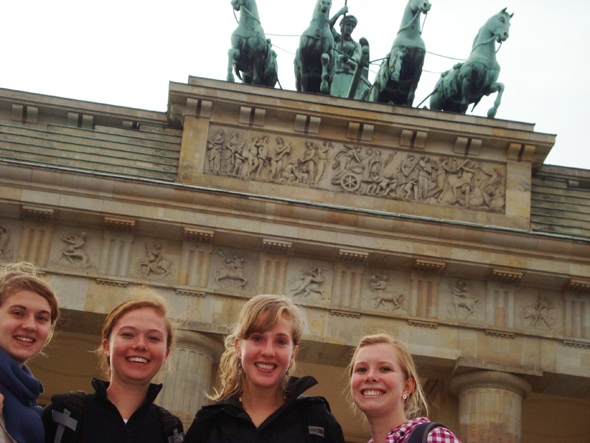 Maia Pfeffer ’11, Hannah Kattermann ’12, Ruthie Welch ’13, and Emily Tomlinson ’13 at the Brandenburger Tor during the fall 2010 German studies Foreign Study Program in Berlin. “Studying history in Berlin is amazing because the city has such a rich and complex past, the traces of which survive in the city’s architecture,” says Pfeffer, a German studies major. The group read Ghosts of Berlin: Confronting German History in the Urban Landscape before arriving in Berlin. (photo by Michael Matt ’13)

The College is a historic leader in off-campus programming—its origins go back to 1958—and today faculty members from more than 20 academic departments, from biological sciences to music, are involved in the development, design, and leadership of more than 40 programs. Located in Brazil, China, Morocco, New Zealand, and 20 other countries, the programs take place on six continents. (See a complete list.) Lindsay Whaley, who oversees study abroad in his role as associate dean for international and interdisciplinary studies says, “We’re thrilled that study abroad remains popular among the Dartmouth student body. The experience can serve as a critical component of an international education, and it can have a lifelong influence on the way someone views the world.” Study abroad at Dartmouth is constantly evolving, and there is a committee on off-campus activities that regularly assesses the quality of the programs and considers new opportunities. In the past two years, new exchange programs have been offered to South Korea’s Yonsei University and to Thailand’s Chulalongkorn University, and this winter a new interdisciplinary program will take place in Hyderabad, India, a city of about 4 million residents of primarily Hindu and Islamic faiths. The new India program—offered by the women’s and gender studies (WGS) and Asian and Middle Eastern Studies programs—will be led by Jennifer Fluri, assistant professor of geography and of WGS. “I’m really excited to be with the students in Hyderabad, which is a wonderfully diverse city, and to approach contemporary India through a range of topics, be it religion, literature, government, or business,” says Fluri, who will teach a course on globalization. In addition to broadening thought, many study abroad programs provide an intensive language learning experience. Sophomore Jacqueline Waugh ’13 is on the Asian and Middle Eastern languages and literatures Foreign Study Program (FSP) in Tangier, Morocco this fall term. In addition to three hours of Arabic each morning, and an afternoon class on Arabic literature, Waugh and the other 11 students on the program have also taken a “language pledge” to speak Arabic outside of class from 7 a.m. to 5 p.m. “Because we largely learn academic vocabulary in class, it becomes easy to think that we are quite advanced at Arabic, so being forced to use the language day-in and day-out for practical aspects of life such as cooking, shopping, or driving is greatly beneficial,” she says. 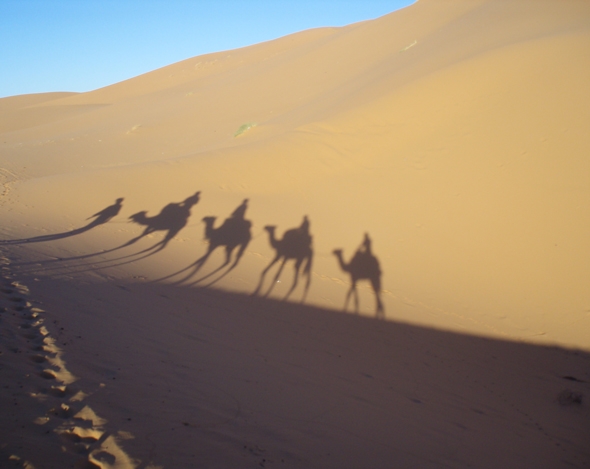 Dartmouth students traveled across the Sahara Desert on camels after spending an evening at a Bedouin camp on the fall 2010 Asian and Middle Eastern languages and literatures FSP based in Tangier, Morocco. The photo was taken by Blakeley Brown ’12, a linguistics major and one of 12 students on the program.