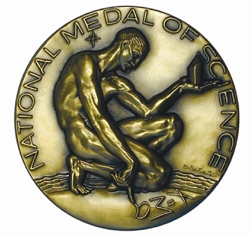 The National Medal of Science is the highest scientific honor bestowed by the President of the United States. (photo courtesy of National Science Foundation)

President Barack Obama recently named Marye Anne Fox A&S Adv ’74 and Mortimer Mishkin ’46, as recipients of the National Medal of Science. The medal, which was granted to only 10 honorees this year, is the nation’s highest honor for scientists, engineers, and inventors.

“The extraordinary accomplishments of these scientists, engineers, and inventors are a testament to American industry and ingenuity,” President Obama said. “Their achievements have redrawn the frontiers of human knowledge while enhancing American prosperity, and it is my tremendous pleasure to honor them for their important contributions.”

Fox, currently serving as the chancellor of University of California at San Diego, was honored for her work in chemistry, which has influenced fields as diverse as polymers, solar energy conversion, and nanotechnology.

Mishkin, a senior investigator at the National Institutes of Health, was honored for his extensive work with the primate brain. His discoveries have led to a deeper understanding of the brain and its relationship to perception and memory. At Dartmouth, he majored in business management during World War II.

Mishkin, who says he is “tremendously pleased” with the honor, gives thanks to two Dartmouth faculty members who introduced him to the field of psychology.  According to him, it was because of them he studied psychology in graduate school.

The recipients received their awards in a formal ceremony at the White House on November 17, 2010.