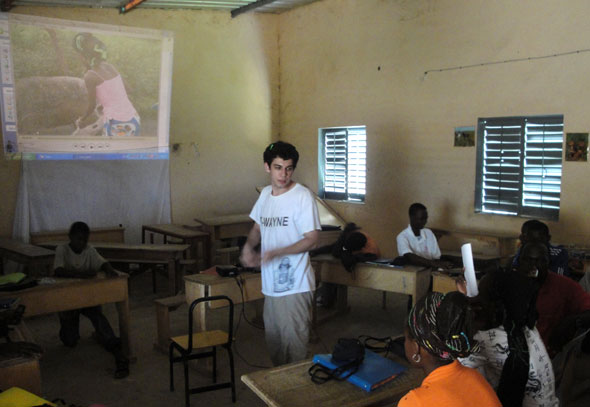 Teicher ’10 reviews footage with the students before editing. (photo by Ben Gifford ’10)

Teicher’s goal for the project was to facilitate digital storytelling among Senegalese students in villages without electricity; however, wary of heavy-handed documentary techniques that can objectify the subject, Teicher allowed the students to film without his presence and to write and record their own narrations. Instead of crafting each individual shot, Teicher worked with the students to develop their storytelling focuses and educate them about methods of storytelling on film. By working in this way, Teicher hoped to create a more honest means of documentary storytelling in which the students had complete control of their narratives. A selection of clips from students’ individual stories, as well as more background information are available online at the project’s website.

“I was completely blown away by the scenes the students filmed—scenes that I, an outsider, could never have witnessed otherwise,” says Teicher. Storytelling has always been a passion for Teicher, and his practical experience spans directing, writing, editing, and project management, and includes an internship for Ark Media, a PBS Frontline production company.  His short film Foursquare Day (2010) is an official selection at the Los Angeles International Children’s Film Festival and the Princeton Student Film and Video Festival. 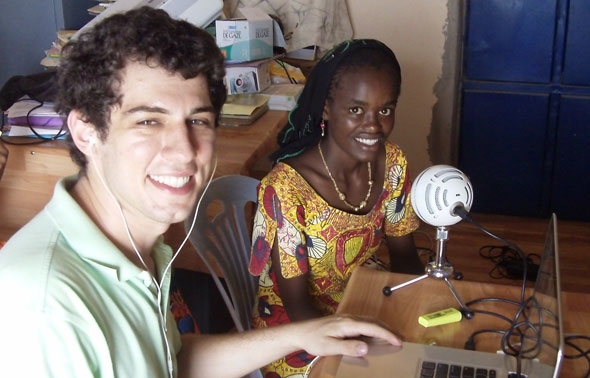 Teicher ’10 records a student’s narration for her film. (photo by Ben Gifford ’10)

“My Dartmouth film courses—and my acting and directing courses in the theater department—certainly gave me a solid background in the craft of storytelling from which to approach this project,” says Teicher. “My general experience as a Dartmouth student helped me develop the organizational ability required to manage a project like this.”

This Is Us premiered at the American Embassy in Dakar, Senegal on November 3 with a subsequent showing at the French Cultural Center in Dakar on November 4. Clips from the film and interviews with Teicher were featured on RTS 1, an internationally-broadcasted Senegalese television station. The Dickey Center’s screening will be held in Haldeman 041 on Wednesday, November 17, at 6:00 p.m. and is free and open to the public. For more information visit the Dickey Center’s event listing.