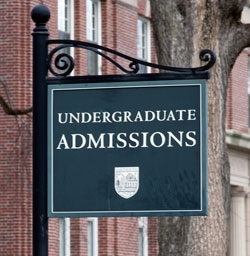 When all is said and done, Dartmouth College will have received nearly 1,800 applications for early decision admission, a College record.

Currently 1,785 early decision undergraduate applications have been counted which represents a 12 percent increase from last year. Dean of Admissions and Financial Aid Maria Laskaris ’84 credits the increase to a variety of factors, including broad recognition of the excellence of the undergraduate experience at the College. Efforts by the Admissions Office to enhance the use of social media to connect prospective students with current students and faculty have also helped to increase interest in Dartmouth.

“We’ve been seeing strong levels of interest from prospective members of the Class of 2015 as early March, 2010, and this interest has continued through the summer and fall,” said Laskaris. “There has been a good deal of attention to the exceptional quality of our undergraduate education—our commitment to first-rate teaching, the important research happening at Dartmouth, the distinctivenes of our off-campus study opportunities, and the breadth and depth of the co-curricular opportunities. When we can connect prospective students with the energy and vitality of our community, either through social media or in-person during a visit to campus, students have the opportunity to see themselves as members of our community.”

Laskaris said she expects that the Class of 2015 will include approximately 400 to 425 early decision applicants. The number will be finalized in early December once she and her staff have a better appreciation for the strength of the applicants in this year’s early decision pool.

Last year, Dartmouth accepted a larger number of early decision applicants—461 students—than in the previous year. Overall, the Admissions Office accepted 2,165 students from an applicant pool of 18,778 for the Class of 2014, with 1,138 students accepting the offer.

Laskaris said that the size of the Class of 2015 will most likely fall in the range of 1,090 to 1,100 students. The application deadline for regular decision is January 1.