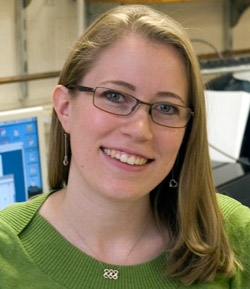 Kozul-Horvath was cited for her work with Joshua Hamilton, PhD, and Bruce Stanton, PhD, at Dartmouth Medical School, as part of the Dartmouth Toxic Metals Superfund Research Program examining the harmful effects of constant environmental exposure to arsenic in drinking water at or below the U.S. Environmental Protection Agency’s standard of 10 parts per billion.

Karen Wetterhahn was a chemistry professor at Dartmouth College and the founder of the Dartmouth Toxic Metals Superfund Research Program. Shortly after her tragic death in 1997, the NIEHS began presenting an award in her memory to recognize an outstanding graduate student or post-doctoral researcher that best exemplifies the qualities exhibited by Dr. Wetterhahn.