During its November meeting last weekend, the Dartmouth Board of Trustees elected Annette Gordon-Reed ’81 as a new trustee, filling the seat vacated by Al Mulley ’70. As previously announced, Mulley will step down from the Board upon assuming his role as the director of the Dartmouth Center for Health Care Delivery Science on November 15.
Image 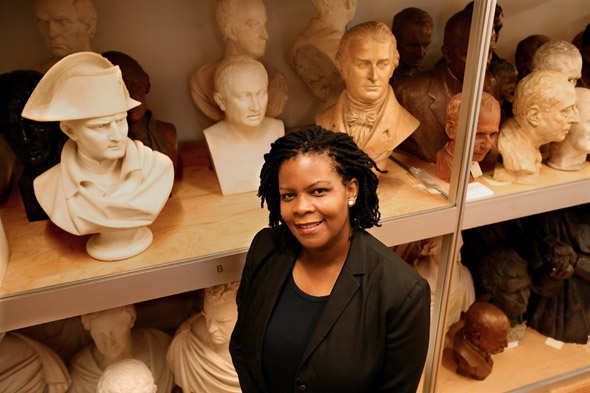 Legal scholar and historian Annette Gordon-Reed ’81, pictured in the New York Historical Society. Gordon-Reed, who was awarded a 2010 MacArthur “genius” Fellowship for her scholarship on Thomas Jefferson, will join Dartmouth’s Board of Trustees in February. (photo: Nicole Bengiveno/The New York Times/Redux)

Gordon-Reed, who will join the Board at its next meeting in February, is a legal scholar and historian, whose 2008 investigation of slavery in the American colonial period and the early American republic, The Hemingses of Monticello: An American Family, won 16 awards, including the 2009 Pulitzer Prize in history. This year, Gordon-Reed was awarded the MacArthur “genius” Fellowship for her scholarship on Thomas Jefferson and was a recipient of the National Humanities Medal.

She is currently a faculty member at Harvard, serving as Professor of Law at Harvard Law School, Professor of History in the Faculty of Arts and Sciences, and the Carol K. Pforzheimer Professor at the Radcliffe Institute for Advanced Study. A history major at Dartmouth, she graduated with high distinction in 1981 and earned a JD from Harvard Law School in 1984. Gordon-Reed is a member of the Dartmouth Alumni Council and serves on the Enrollment & Admissions and Student Affairs committees. She lives in New York City with her husband. The couple has two children.

Steve Mandel ’78, chair of the Board of Trustees, said, “We are delighted to add such a distinguished scholar to Dartmouth’s Board. Annette will bring a valuable perspective that will enhance and complement the talents of our current trustees. My fellow Board members and I greatly look forward to working with her.”

Gordon-Reed said, “I am deeply honored by this opportunity to serve Dartmouth. As an undergraduate, Dartmouth fueled my passion in history, and I am grateful that pursuing that passion has led me back to campus. I have enjoyed immensely serving the College as an alumna volunteer, and I am delighted to have the chance to become even more deeply involved in the life and governance of the College.”

During the two-day meeting, the Board also reviewed and approved a proposed program of renovations and improvements to the Hanover Inn, which aims to enhance its value to the Dartmouth and local communities. The estimated $13 million construction cost will require no new operating funds from the College, as financing for the project will be supported by existing funds and future revenue growth from the Inn.

President Kim said, “This critical renovation will make the Inn a more vibrant meeting and gathering center, benefiting both the College and the local economy. Enhancing the Inn—the ‘front door’ to Dartmouth for many prospective students and their parents, prospective faculty, and other first-time visitors—with superior dining and meeting facilities will also provide a dynamic space where scholars from around the world can meet and share ideas.”

Renovations will add 16 new guest rooms by relocating existing upper-floor meeting and administrative spaces to the ground floor and lower level. The overall guest experience will be enhanced by renovating the remaining guest rooms and the lobby and dining areas. Major upgrades to building systems will improve energy efficiency and reduce operational costs. The hotel’s meeting spaces will be augmented and equipped with enhanced technology.

With Board approval, the College will move forward with the permitting process; construction is expected to begin after Commencement in 2011, with completion targeted just prior to Commencement in 2012. The Inn will remain in operation throughout the renovations.

The trustees received reports from each of the Board committees. The president and Board also discussed the need to create additional spaces on campus where students, faculty, and other members of the community can gather and exchange ideas in informal settings. Demand for such spaces has been demonstrated by the popularity of One Wheelock, a student-managed coffee lounge on the lower level of the Collis Center, which opened in November 2009.

On Friday, trustees met with faculty and students from the 2010 TEDx at Dartmouth, a self-organized offshoot of the renowned TED Conference that annually brings together the world’s leading thinkers and doers to speak about “Ideas Worth Spreading.” TEDx at Dartmouth held its first event on campus last spring, and included presentations by ten Dartmouth professors and four Dartmouth students on subjects ranging from the use of games for social change to giving directions in early modern London. Planning is underway for the 2011 TEDx at Dartmouth, scheduled for next March.