Public debate over the place of religion in society; a puzzle in a magazine; headlines about cultures clashing. Sometimes it’s such fragments of daily life that capture the imagination of a scholar and fuel the desire to understand an idea or an event. Academic research grows from just that source: the curiosity to pursue a topic to its roots, to refine a theory with students and colleagues, and to share discoveries with the wider world. Dartmouth faculty member Susan Ackerman shares the big ideas that drive her work as a teacher-scholar. (Paul D. Paganucci Professor of Italian Language and Literature Graziella Paratiis profiled in the second installment of this story, published November 30, 2010, and Albert Bradley Third Century Professor in the Sciences Peter Winkler is profiled in the third, published December 3, 2010.)

When Susan Ackerman ’80 says she explores the religion of ancient Israel, she doesn’t mean she necessarily targets what is written in the Bible. The idea that has fueled her work ever since she wrote her doctoral dissertation 25 years ago is that stories in the Bible describe the religion as ancient writers and authorities wanted it to be, but not necessarily as it actually was. 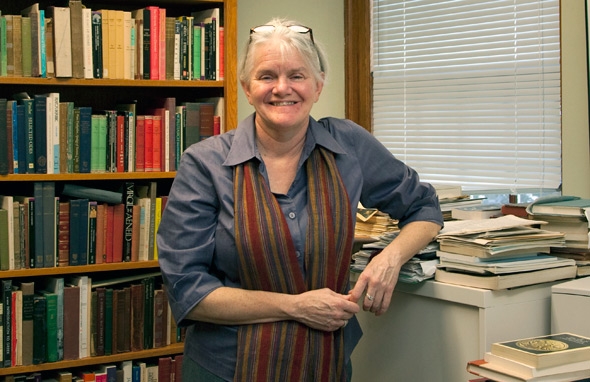 Susan Ackerman ’80, the Preston H. Kelsey Professor of Religion, is currently finishing a project on women and the religion of ancient Israel and plans to focus on the book of Exodus in the future. (photo by Joseph Mehling ’69)

“I’ve been much more interested in religion as it would have been practiced by the common people,” says Ackerman, the Preston H. Kelsey Professor of Religion and department chair. “I’m interested basically in rebels, people who go against what they’re told to do.”

Ackerman currently has demons on her mind, and she is exploring how mirrors and drums may have been used to ward them off. Her investigation involves examining literatures from civilizations in the biblical world with which Israel would have interacted and shared cultural traits. “In Mesopotamian mythology, for example,” Ackerman says, “gods are really bothered by loud noise. I’m wondering if that suggests that supernatural beings generally are bothered by noise, which would be evidence for drums being used to scare demons away.”

Ackerman also consults archeological sources: “I’m looking right now at evidence that comes from ancient tombs where people were buried with amulets or jewelry embedded with mirrors. Again, my intuition asks why you would wear a piece of jewelry with a mirror in it: it’s because if demonic forces come to rob your tomb, they’ll be scared away by their own reflection.”

Also under way, she says, is a large volume that will be encyclopedic, synthetic, and ultimately her summary statement on women and the religion of ancient Israel.

“I’ve been dealing with issues of women and Israelite religion almost since the time I finished my doctoral dissertation. I’m trying to write this book that I envision as being my final comment on this area, and that brings together all my ideas on it, which is why it is becoming such a massive project.”

Once that is complete, Ackerman’s next endeavor will involve the book of Exodus. “I’m really interested in the way Exodus, as a piece of biblical literature, intersects with literatures and reflects mythic traditions elsewhere in the biblical world,” she says. “Some of that work has been done elsewhere by other scholars, but I again have intuitions about some things I want to do.”

Ackerman describes her research as primarily a solo pursuit. But twice in her career she has published with others, and in both cases, they were journal articles she wrote with Dartmouth undergraduates, based on research work they did in her classes. The topics they took on together—Rachel’s tomb, and Persian social turmoil and the fate of Queen Esther—made genuine contributions to her field.

“While there are good students at every school in America,” she acknowledges, “they are so uniformly good at Dartmouth, it’s just a joy to work with such unbelievably smart, bright, and talented students. To have students you feel like you can publish articles with is extremely rewarding.”