Anise Vance ’11 is applying to graduate school this fall.

Immersed in a process that can be stressful and financially straining, Vance, a geography major and one of 20 juniors nationwide chosen as a Beinecke Scholar last spring, has welcomed the support of the Mellon Mays Undergraduate Fellowship program.

The Mellon Mays program makes the graduate application process easier, says Vance, in many ways. First, he says, the program “gets students to think about research early on in their undergraduate careers,” and then encourages them “to think about graduate school as a real possibility.” Now that he is a senior and making plans beyond Dartmouth, he particularly appreciates the “advising and mentoring from professors and peers alike that guide students through what can seem like a maze.”

The Mellon Mays Undergraduate Fellowship program was established in 1988 by the Andrew W. Mellon Foundation in an effort to address the small number of faculty of color in academia by encouraging students to pursue academic careers.

The program made its debut at Dartmouth in 1989, with Susan Wright A’69, former student advisor and Dartmouth’s first lady, as its first coordinator. The late President Emeritus James O. Freedman, says Wright, recognized the program’s potential for introducing sophomore students to independent research, opportunities for national scholarships, careers in academia, and, most importantly, faculty mentorship and advising. “Introducing students to the methods and joys of research early enough so they can prepare for independent study or thesis work during senior year was innovative and unusual at the time,” says Wright. 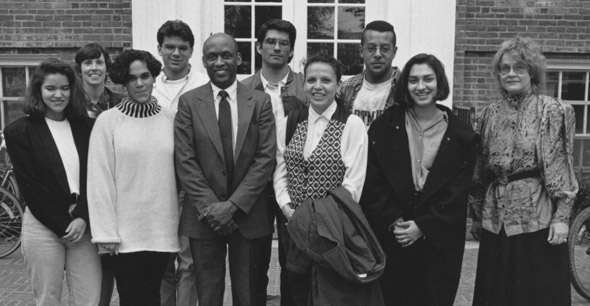 The first cohort of Mellon Mays fellows graduated from Dartmouth in 1991. That group included alumni who would become highly regarded in their fields including Jodi Archambault Gillette ’91, deputy associate director of the White House Office of Intergovernmental Affairs, and Alvin Warren ’91 cabinet secretary of the New Mexico Indian Affairs Department.

Lillian Guerra ’92, associate professor of Cuban and Caribbean history at the University of Florida, says she would not have pursued her “fulfilling career” without the support of Mellon Mays. Guerra faced resistance when she decided to attend graduate school. She says, “As a child of immigrants, I found it difficult for my family to support my pursuit of a doctorate. They wanted a Wall Street broker not a college teacher!"

Former undergraduate fellow Monica Miller ’92, is an associate professor of English at Barnard College and leads the Mellon Mays program there. “I admired my professors at Dartmouth so much for the ways in which they modeled an intellectually and socially engaged life,” she recalls. “That I could possibly be one of them seemed like a dream. With the help of Mellon Mays, that dream came true.”

This fall, Michelle Warren, professor of comparative literature, succeeded Richard Wright, Orvil E. Dryfoos Professor of Public Affairs and professor of geography, in the role of coordinator. According to Warren, “finding out what impassions students, and helping them connect those passions to the institutional structures of academia” is her main role as a coordinator.

One fellow from the Class of 2010 entered graduate school this fall, and at least two others intend to follow that path in the coming years. Past fellows are currently pursuing careers outside of academia, in communications, education, medicine, business, and law. “For those students who ultimately pursue non-academic careers,” Warren says, “Mellon Mays provides a unique undergraduate experience that brings together students from many different majors around shared commitments to social justice,” says Warren. “I think that every Mellon Mays alumnus has profited from that experience, and they are likely to carry those lessons into whatever life path they choose.”