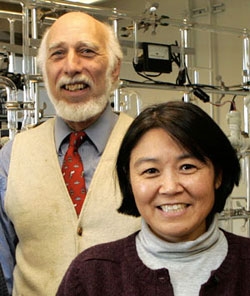 Eric Posmentier and Xiahong Feng will be collaborating with native Greenlanders to track Arctic storms. (photo by Joseph Mehling ’69)

Named iisPACS (Isotopic Investigation of Sea-ice and Precipitation in the Arctic Climate System), the project allows Feng and Posmentier to combine their research specialties to study climate change in a unique way. Feng’s work is primarily in geochemistry and hydrochemistry, while Posmentier focuses on geophysics including physical oceanography, marine weather, and climatology.

Their collaborative work will investigate the impacts of changing sea ice on evaporation and precipitation in the Arctic. As sea ice melts with warming, the ocean surface evaporates more rapidly and produces heavier precipitation in the Arctic region in the form of snow, thus whitening the land and causing the surface to reflect more sunlight and cool. This negative feedback mechanism in the climate system tends to stabilize the climate and dampen climate change. Feng and Posmentier will use isotopic compositions of storm-by-storm samples of precipitation, pan-Arctic meteorological data and numerical modeling to quantify the influence of changing sea ice area on the Arctic hydrological cycle.

The focus on isolating individual storms, understanding storm movement, and analyzing isotopic compositions in the storm samples is central to the project; “Storms that swing by different places apparently ‘feel’ different extents of sea ice. If you mix two storms it’s hard to separate the effect of sea ice from other weather factors, and that’s why we argue for storm-by-storm sampling,” says Feng. Samples will be gathered not only by nine participating Arctic observatories, but also by three Greenland schools.

Including local residents in data collection is one of the project’s greatest strengths, asserts Posmentier. Many native Greenlanders “come from a very old culture and they’ve been observing weather and climate for a few thousand years,” says Posmentier. “They have their own ways of doing it, for their own reasons, and I think that we have as much to learn from them as they do from us—and maybe more.” 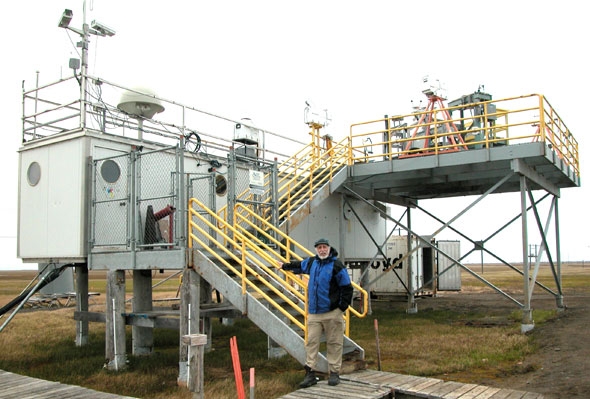 Professor Eric Posmentier photographed at the Department of Energy’s Atmospheric Radiation Measurement (ARM) Climate Research Facility in Barrow, Alaska. The structure behind Posementier is called skydeck and was built to install radiation measurement equipment. The iisPACS project will collect data from a skydeck location nearby. (photo courtesy of Eric Posementier)

Feng and Posmentier note that while their work looks to answer questions about future climate predictions, it will uncover the past as well. Feng, a co-principal investigator for the Dartmouth IGERT project for Polar and Environmental Change, has studied paleoclimate change and is familiar with Greenland ice core data that record the climate history of the past several 100,000 years. The current study will help interpret the ice core data. In earth science, says Feng, “the present is the key to the past.”

“And the past is key to the future,” adds Posmentier.