Midway into her first year at Dartmouth, Samantha “Sam” Gutiérrez ’11 was reconsidering her initial plan to major in government. So she sat down with the course catalog, selected all the courses she was interested in, and emerged with a triple major in women’s and gender studies, geography, and sociology. 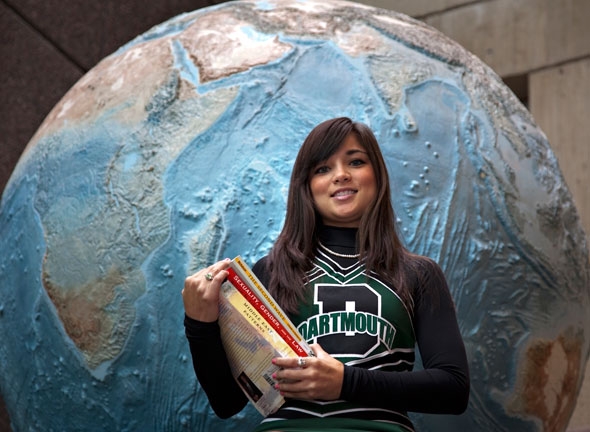 Ready to take on the world: Samantha “Sam” Gutiérrez ’11 (pictured in front of the globe in the Fairchild Physical Science Center atrium) is a triple major, a member of the Dartmouth cheer team, and is interested in gender and the law. (photo by Joseph Mehling ’69)

Gutiérrez counts herself equally dedicated to all three subjects, but one course in particular—“Inside Out: Women, Prison, and Performance”—convinced her to concentrate on gender and the law. The interdisciplinary course taught by Professor Ivy Schweitzer was held at Dartmouth and the Valley Vista women’s substance abuse center in Bradford, Vt.

“At the end of the course, we put on a performance along with the residents, and the audience couldn’t tell who was who,” says Gutiérrez. “It made me realize I could very easily be in the residents’ shoes, that we’re all human and not as different as we think we are. In a lot of ways it changed my life.”

Inspired by the course, Gutiérrez convinced the sheriff’s department in Palm Beach, Fla., to allow her to be the first intern ever at the county’s all-male, maximum-security jail. There, she was challenged by her work with juvenile offenders as well as by the prison environment.

Gutiérrez recalls, “On my third or fourth day, I went over to a group of guys that had been yelling at me and asked them, ‘Do you think anyone cares about you on the outside of this facility?’ They said no, so I said, ‘Well, that’s why I’m here. I care about you, and I respect you as a human being, and it would be awesome if you could respect me, too.’ After that, I really didn’t have any issues.”

Back at Dartmouth, being a triple major hasn’t kept Gutiérrez from pursuing extracurricular interests. She remains involved in prison work, volunteering with the Tucker Foundation’s Prison Project, which connects students with male inmates at the Windsor Correctional Facility in Windsor, Vt. Additionally, she is an Undergraduate Advisor, a member of Delta Delta Delta sorority, has served on Green Key Society and Student Assembly, and was tapped for the senior society Palaeopitus.

Gutiérrez has also been a competitive cheerleader since high school. When she arrived at Dartmouth eager to continue her sport, however, she found a club cheering program that was struggling. “I put a lot of my time into building the team,” she recalls.

The turning point came during her sophomore spring when newly arrived Residential Life Community Director Josh Hartman, who is a nationally certified cheering coach, approached Gutiérrez about developing a competitive co-ed team. “The program took off,” she says. “We now have over 30 members and the team plans to compete in the National Cheerleaders Association Collegiate Cheer Championship for the first time this spring.”

So, what does a triple major-cheerleader-prison volunteer do after Dartmouth? “I’ve thought a lot about criminal law and criminal defense,” remarks Gutiérrez. “I don’t know if that will be the right fit for me,” but for the moment, she says, her experience and interests are pointing in that direction.

The story was co-authored by Elizabeth Kelsey.