In the Classroom: Professor Laura Edmondson on “Human Rights and Performance”

It is not uncommon for more than half the students to have their hands raised at any given moment in Associate Professor of Theater Laura Edmondson’s theater and comparative literature course “Human Rights and Performance.” As students examine theatrical representations of the 1994 Rwanda genocide, the brutality of the Khmer Rouge, and numerous other human rights violations, they actively debate the ambiguities and biases within texts. Edmondson hopes these debates will provide her students with critical skills they may apply to their daily lives. 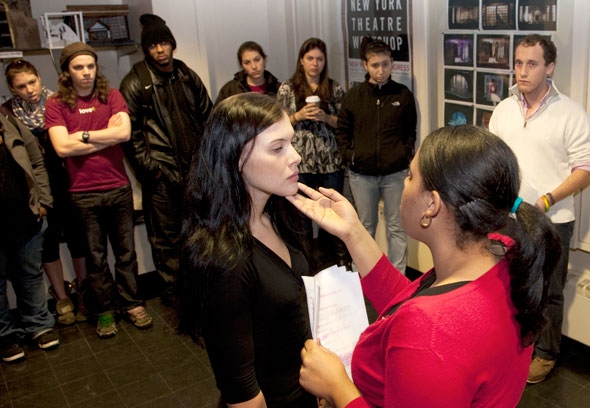 Susan Edwardson ’12, Graciela Pichardo ’11, and Rob Avruch ’11 perform a scene from the play “Ruined” by Lynn Nottage during the final project for the interdisciplinary class, “Human Rights and Performance.” Other members of final project group are Emily Baxter ’11 and Danielle Cayton, a Masters of Liberal Arts student. (photo by Joseph Mehling ’69)

Listen to a scene from “Ruined” with Rob Avruch ’11 (white shirt, above) as a trafficker of women, and with Graciela Pichardo ’11 as “Mama,” a proprietor of a brothel.

“I can’t give up hope in the idea that representing episodes of violence through theater can lead to moments of witnessing,” says Edmondson, who is teaching the class for the third time since coming to Dartmouth in 2006.  “We live in a society constantly bombarded by information about traumatic events, and it’s easy to stop listening. My hope is that students in my class will be able to listen more deeply to what’s going on in different parts of the world through the lens of the plays we study.”

This emphasis on witnessing allows the 18 students in the course to draw upon their wide range of personal and academic backgrounds to create lively and engaging class discussions. With both freshmen and senior fellows enrolled in the course, this classroom diversity makes for compelling interactions.

“I think we have a really interesting group of people—some people I know, some I have had class with, some I had never met before,” says Emily Baxter ’11, an anthropology modified with women and gender studies major with government and theater minors. “Having all those different experiences provides a really broad perspective with people looking at an issue from all different views.”

The students’ broad perspectives are applied to various genres of human rights theater throughout the term.  These genres, which range from Erik Ehn’s surrealist exploration of the Rwanda genocide in Maria Kizito to Gregory Burke’s testimonial-based examination of Scottish participation in British Operations in Iraq in Black Watch, allow Edmondson to draw upon her extensive research with relation to human rights performance in East Africa.

“In a strange way, this was how I responded to the War in Iraq,” says Edmondson. “I became intensely interested in issues of war and violence, and how East African artists translate mass violence to the stage.”

At the time, Edmondson had been researching and writing on the intersection of theater and nationalism in Tanzania for several years. When the war broke out in 2003, she became interested in the role of theater and performance in northern Uganda, which had been decimated by a civil war that lasted for over twenty years. Her interests have since expanded to include representations of the 1994 genocide in Rwanda and the continuing crisis in the eastern region of the Democratic Republic of Congo. Edmondson finds that the transnational nature of violence in this region has resulted in artists callaborating across national borders to create representations of cycles of violence that transcend violence in individual states.

“That really fascinates me,” says Edmondson. “This idea of an East African identity superseding a national one.”

Edmondson furthers her scholarship—and that of her students—by inviting a wide range of experts and artists, including Montgomery Fellow Peter Sellars and Pulitzer Prize winner Lynn Nottage, to discuss their works and inspirations. This term, Sophiline Cheam Shapiro, director and choreographer of the Khmer Arts Ensemble, spoke to the class about the inspiration behind the ensemble’s production of The Lives of Giants at the Hopkins Center; Lisa Peschel, PhD, an American theater scholar from Harvard, spoke of her experience researching and writing a play about the Terezín/Theresienstadt concentration camp; and Francine A’ness, a scholar of Latin American theater, spoke about Griselda Gambaro’s Information for Foreigners and its portrayal of the Argentenian “Dirty War.”

“It’s interesting to look at how artists deal with some of the most horrific things that can happen, and how they can be complicit, how they can oppose it, how they can be affected by it, and what choices they make,” says Gabe Dorfsman-Hopkins ’13, a comparative literature and mathematics major. “We’re raised having a protagonist and antagonist with nothing else, no continuum. But if you deal with it as black and white, what do you learn?”

This interaction with artists in the field allows students to gain an understanding of the practical nature of human rights performance, an experience furthered by their participation in a final group project. In these projects, the students devise and stage interpretations of scenes from the plays studied throughout the term. The students are given creative freedom to interpret, juxtapose, and stage the texts as they please, giving them functional exposure to the difficulties of depicting human rights violations on stage.

“The creative project at the end of Professor Edmondson’s class really allows us to draw upon everything that we’ve studied in the course and put it into practice,” says Sarah Laeuchli ’11, a theater major. “It’s an opportunity to not just read and discuss complicated ideas and theories but to experience what it is like to deal with those issues in a very real and practical way.”

While the students are excited to present their final staging, Edmondson mirrors this excitement and passion for both the course and its students, and her ever-questioning and ever-searching approach to the topic ensures that neither she nor her students grow bored of the subject.

“I absolutely learn from the students,” says Edmondson. “There’s something about the topic that attracts students who are particularly passionate and articulate, and their ideas deeply inform my own thinking and writing about this fascinating and troubling subject.”

Excerpt from the performance of a final group project:

“Theater has the ability to both draw and blur the lines. With the right cues, we can differentiate the victim from the perpetrator. We fill in the narratives we know so well. Through this theater we can discover universal truths. But theater also has the ability to blur lines and rupture linear narratives to both expose the irrationality of human rights abuses and push the parameters of how we understand human rights. When truth is oftentimes relative, the theater can be a valuable space to interrogate the very foundations upon which our human rights are anchored.”