A ‘Culture of Success’ 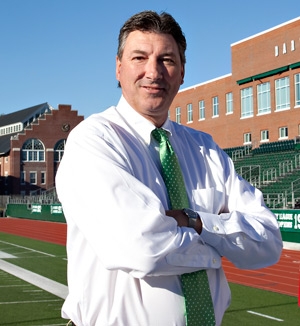 Since arriving on the job in September, Athletics Director Harry Sheehy has found that Dartmouth student-athletes not only want to win, “they’re willing to put in the time and effort to do so.” (photo by Joseph Mehling ’69)

September 1 was Harry Sheehy’s official start date as Dartmouth’s eighth athletic director. But the affable former Williams College AD was spotted in Hanover several times in August, chatting with alumni and supporters of Athletics at the annual sponsors picnic; addressing student-athletes participating in a leadership program; and just hanging around Alumni Gym getting to know his staff.

“I’m so thankful I came up those seven or eight times because it enabled me to actually work on my first day,” he says, laughing. During his 10-year tenure as director of athletics at Williams, the Ephs won 17 NCAA Division III national team titles and finished first every year in the D-III Director’s Cup, which is awarded annually to the athletics program that achieves the greatest success over a variety of 18 sports. Sheehy, a 1975 Williams graduate and former two-time All-American, was also his alma mater’s men’s basketball coach for 17 years, compiling a 324-104 (.757) record. Sheehy spoke with Dartmouth Life during fall term about his new job.

“Dartmouth is a wonderful institution, and I thought the environment would fit me well. My wife Connie and I have known the community for a long time, and it’s a beautiful place to live. Having the chance to work with President Kim and an outstanding staff was also key. But the final piece was the challenge of the job. The opportunity to run an NCAA Division I athletic program and yet still know that the student-athlete was at the center of our thoughts educationally, was really the key component.”

“I’m in the middle of meeting with all 70-plus varsity team captains right now. I’ve been very impressed with the Dartmouth student-athlete. They really want to be good, and they’re willing to put in the time and effort to do so. I’m learning that they’re not totally satisfied with where the institution has been athletically and that they want to be thought of as championship caliber. Winning is important here. It’s not the only thing that we’re going to judge our program on. But if students are going to give this much time, it’s important to be competitive and to give them the resources to try to win.”

“Obviously we have great facilities. But I think we have to create a culture of success here. It’s been here before. But looking at the last decade, there is probably a little bit of an inferiority complex at Dartmouth athletically, which is why I went to our coaches and said, ‘Forget it, stand toe to toe. We’re going to compete, and we’re not going to back down from anybody.’”

“I’ve met with a number of prospective student-athletes and my pitch is passion. This is just a wonderful college, and this is a great place to study and play their sport. They’re going to be well-coached and have an athletic director, senior leadership, and a president that wants them to succeed. The pitch is that greatness has lived here before, there’s greatness here now, and greatness will be here in the future. And I want them to be a part of it.”

“The number of teaching opportunities that come up in a single day at practice, it’s just mind-boggling. The emotional teaching moments, physical teaching moments, skill development—teaching young folks how to compete is a huge piece of the pie to me. In my 17 years as a head basketball coach, I probably didn’t have more than a handful of young men come to me who actually understood competition. Both how to do it well and what was lacking in what they were doing. And you can teach that. So I was thrilled to hear President Kim say that competition, helping young men and women learn through competition, is something he’s really interested in.”

“I have this little box on my desk, and it says ‘The secret of success.’ When you open it, it says ‘Work.’ I remember my dad telling me something he heard Bill Bradley say: ‘Somewhere, someone else is going to shoot the ball an 10 extra minutes. And if you shoot 10 more minutes, when you guys meet, you’ll win.’”

“I’m thrilled to be here and I’m loving every day. I’ve never worked harder and I’ve never been happier. We are trying to do something every day that makes Dartmouth athletics better and tending to things that need work. I’m also working on a fitness and wellness initiative that all of our students can tap into and carry forward after they graduate.”

“We have a couple of fundraising initiatives. One is to endow coaching positions. We have three endowed coaching positions—football, men’s track, and women’s track, plus our director of strength and conditioning. This compares to 23 for Cornell, 19 for Yale, 11 for Harvard, 9 for Brown, and 4 for Columbia. Penn and Princeton are also up there in the same range as Brown. Endowing a position frees up money to do other things, which is really important. We’re also trying to increase our annual giving, which is crucial to teams’ operating budgets and allows student-athletes to do the things that competing institutions are doing.”