In the Studio with Professor Enrico Riley ’95

When he arrived at Dartmouth from his hometown of Richmond, Va., Enrico Riley ’95 had planned to study engineering. But he soon realized that his “heart wasn’t in it.” He had been making art most of his life and says, “I thought it important to be connected to what I was studying. So I followed my intuition.” Riley earned an AB in visual studies from Dartmouth and an MFA in painting from Yale. An assistant professor of studio art, he has been teaching at Dartmouth since 2001. 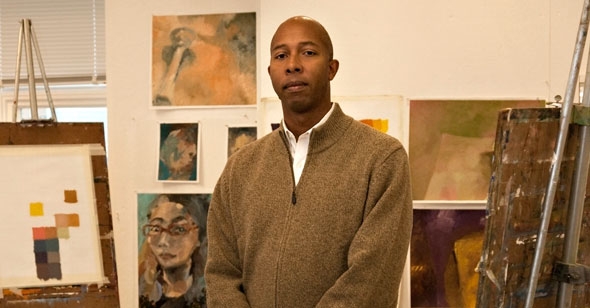 Painter Enrico Riley ’95 draws inspiration from star charts in his work (below right). In the classroom, he guides students as they “become conversant in the language of painting and drawing.” (photo by Joseph Mehling ’69)

It’s in the stars: Riley recently completed a year-long John Simon Guggenheim Fellowship. While he spent most of his fellowship year painting in his Lebanon, N.H., studio, he also ventured further afield. Riley spent a week examining 14th-century illuminated manuscripts at the Bodleian Library in England, the University of Oxford’s rare books library. He also worked with a facsimile of a 14th-century Islamic treatise on astronomy. 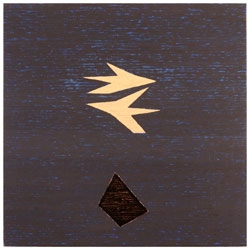 “I’m interested in star constellations,” says Riley, who recently had shows at the Jill Newhouse Gallery in New York City and the Southern Vermont Arts Center in Manchester, Vt. “I’ve worked on a lot of paintings that are derived from star charts and maps.”

The language of art: “There are so many things I enjoy about teaching,” says Riley, who returned to the classroom for “Drawing I” and “Painting I” this fall. “Witnessing students beginning to have opinions of their own and becoming conversant in the language of painting and drawing—to see people learn and become empowered in that way is extremely exciting.”

Learning from a master: Riley’s “Painting I” class met in mid-October with acclaimed abstract artist Frank Stella at the Hood Museum of Art. The artist discussed his work while leading the students through the exhibition “Frank Stella: Irregular Polygons.”

“It’s amazing for my students to have the chance to talk to a painter who contributed, and is still contributing, so much to American art,” says Riley. He had a similar experience working with modernist Jake Berthot, who was an artist-in-residence during the year Riley remained at Dartmouth as a studio art teaching assistant following his own graduation. “Stella represents to them the opportunity to talk to a living treasure, both in terms of his life experience and in regards to his art.”

Liberal arts and studio art: While a graduate student at Yale, Riley gained further appreciation for his liberal arts degree. “There were a few students who had amazing technical skills and were already stylistically formed,” says Riley. “Though I was still searching, I was quite happy that I had my undergraduate liberal arts education. Maybe I had to spend a little more time in the studio dealing with technical issues, but I think your overall ability to read and digest information and to think critically is strengthened in a liberal arts education.”