Three books by Professor Sarah Allan of the Department of Asian and Middle Eastern Languages and Literatures, were recently published as part of a series by Commercial Press (Shangwu Yinshuguan), which was China’s first modern publishing house and is now a major academic book publisher. A fourth book by Allan will also be published in early 2011 as part of this anthology, entitled Ai Lan Wenji (“The Collected Works of Sarah Allan”). 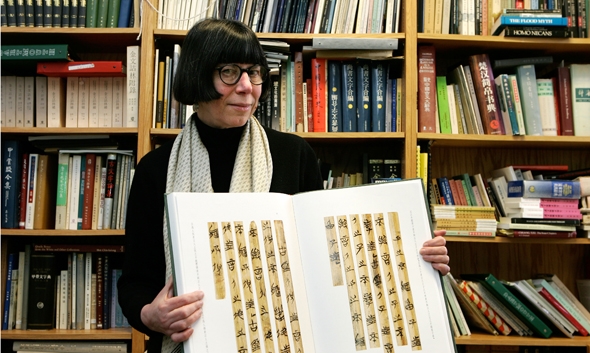 “This is certainly a rare honor for a Western sinologist,” says Allan, who is Dartmouth’s Burlington Northern Foundation Professor of Asian Studies in honor of Richard M. Bressler. “Although these books had been published previously in China, they had gone out of print. The publication of this new set of books by a publisher with a wide distribution system in China, Taiwan, and Hong Kong, means that most of my research will be readily available in a convenient form to a much broader audience, including a new generation of Chinese readers.”

The title of volume one is The Shape of the Turtle: Myth, Art, and Cosmos in Early China (1991). Volume two is The Way of Water and Sprouts of Virtue (1997), and volume three is The Heir and the Sage: Dynastic Legend in Early China (1981). The fourth volume, originally published in 1999, is a collection of essays entitled Early Chinese History, Thought, and Culture. The Heir and the Sage is a new translation, and the translations of the other books have been substantially revised and new essays added to each volume.

Allan’s research focuses on China in the first two millenniums BCE. “My interests are broad-ranging and interdisciplinary, but much of my research has been about the formation of the philosophical and historical traditions,” says Allan, who is chair of the Society for the Study of Early China and editor of the society’s journal, Early China. “I am particularly interested in those aspects of early Chinese civilization that set patterns important in the later development of Chinese civilization.”

Her research materials include early literature, material artifacts from archaeological excavations, and excavated texts. “The excavated texts that I have worked on include the earliest known Chinese writing—divinations written on bone and shell (oracle bone inscriptions), inscriptions cast on bronze vessels, and, most recently, bamboo slips manuscripts,” Allan says.