Peter Winkler, the Albert Bradley Third Century Professor in the Sciences, has been named a winner of the 2011 David P. Robbins Prize by the Mathematical Association of America (MAA) for the paper “Maximum Overhang,” published in the November 2009 issue of The American Mathematical Monthly. 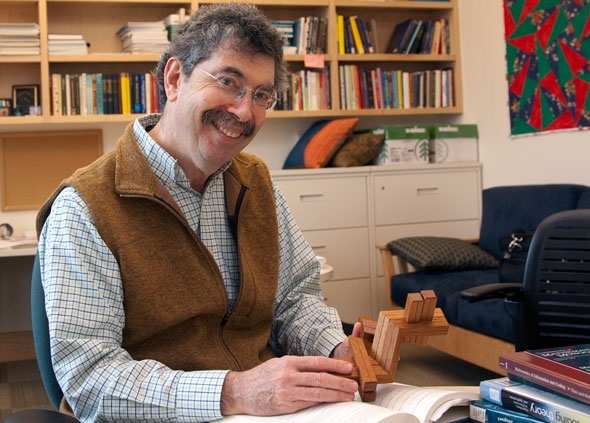 Winkler, who teaches in both the mathematics and computer science departments, collaborated with four others to solve the centuries-old problem of overhang. The problem poses the question of how far stacked bricks can be made to hang over a table’s edge.

Many mathematicians believed they knew the solution, but the team proved that for large numbers of bricks, the stack could be made to extend much farther than previously thought. Furthermore, the optimal stack of bricks looked very different from earlier solutions.

“Our work on the overhang problem is a good example of not taking anything for granted,” says Winkler. “Most people, including me, thought this 150-year-old problem was solved; turns out, the widely-believed answer was far from the truth.”

The MAA even credits the group for producing information that can be accessible to interested undergraduates, though the solution makes use of complicated discrete mathematics.

“It will not surprise people to hear that most of what I do, and what other mathematicians and computer scientists do, is not easily explicable to a layman,” Winkler says. “It’s gratifying occasionally to provide an answer for a question that can be posed in a few seconds.”