Papers of Eugen Rosenstock-Huessy and Franz Rosenzweig Donated to Dartmouth 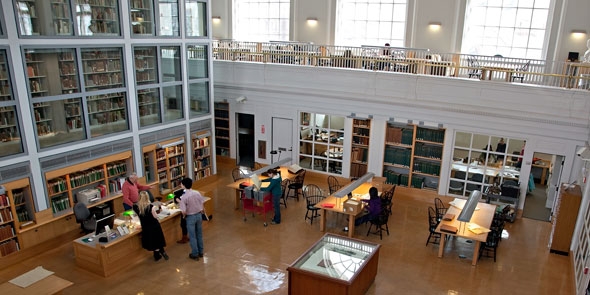 The reading room in Rauner Special Collections Library. Following a recent gift to the College, Dartmouth becomes the principal archive in the United States for the study of the life and work of Eugen Rosenstock-Huessy and a central destination for students of Franz Rosenzweig. (photo by Joseph Mehling ’69)

Eugen Rosenstock-Huessy (1888-1973) is considered one of the leading social and religious philosophers of the twentieth century. Born in Berlin in 1888, he began a distinguished academic career in Germany teaching the history of medieval law. When Hitler rose to power in 1933, Rosenstock-Huessy immediately resigned his position at the University of Breslau and shortly thereafter immigrated to the United States. He taught for two years at Harvard and then moved to Dartmouth in 1935, where he was a professor in the philosophy department until his retirement from teaching in 1957.

Rosenzweig (1886-1929), a preeminent Jewish thinker of the 20th century, was a leading interpreter of Hegel and the author of The Star of Redemption (1921). He and Rosenstock-Huessy became close friends and influenced each other profoundly. Although Rosenstock-Huessy was born into a nominally Jewish family, he became a Christian in his teens. Rosenzweig, from a similar background, became a devout Jew in the years following 1913. The two men addressed their differences with remarkable directness and candor. 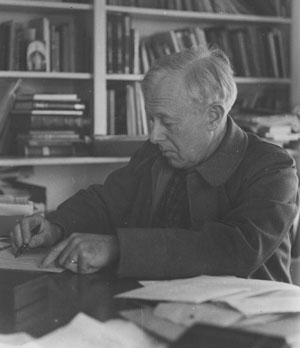 Eugen Rosenstock-Huessy, one of the leading social and religious philosophers of the twentieth century, was a member of the Dartmouth faculty from 1935 to 1957. (photo courtesy of Rauner Special Collections Library)

In the 1920s, Rosenzweig and Rosenstock-Huessy, along with a group of distinguished Continental intellectuals that included Martin Buber and Nicolas Berdyaev, were closely involved with the radical, inter-denominational journal Die Kreatur, published between 1926 and 1930 in Berlin.

“We are delighted these papers are joining the collections at Dartmouth,” says Provost Carol Folt. “This gift provides new avenues for research in many areas,” she notes. “The materials reveal crucial connections between 20th century intellectual history and political and social thought, demonstrate the impact of those ideas on Dartmouth students, and illuminate how those ideas have been translated into action.”

Susannah Heschel, the Eli Black Professor of Jewish Studies, says “the acquisition of papers of Eugen Rosenstock-Huessy and Franz Rosenzweig marks a significant achievement for the archival collections of Dartmouth College and for the Jewish Studies Program at Dartmouth. The impact of Eugen and Margrit Rosenstock-Huessy on the philosophical work of Rosenzweig,” she continues, “particularly his influential theological writings on Judaism, was profound and of enormous interest to scholars. With this gift, the Dartmouth College Library becomes a central archive for research on a crucial moment in German-Jewish thought, Christian self-understanding, and Jewish-Christian relations.”

The Rosenstock-Huessy papers also include substantial material relating to Camp William James, the volunteer work camp in Vermont organized by Rosenstock-Huessy and a group of Dartmouth and Harvard students between 1939 and 1941. “Eugen Rosenstock-Huessy had a profound effect on generations of Dartmouth students,” notes Special Collections Librarian Jay Satterfield, “inspiring them to create social change based on philosophical foundations. These papers help us understand his influence in local, national, and international contexts.”