Noel Paul Stookey last performed at Dartmouth on October 9, 1965, with the legendary folk trio Peter, Paul & Mary. Now he returns on Saturday, January 22, to participate in several of Dartmouth’s Martin Luther King Jr. celebration events, including “Music for Social Change with Noel Paul Stookey and Company,” a free concert and documentary film showing at Spaulding Auditorium from 7:30 to 9:30 p.m. 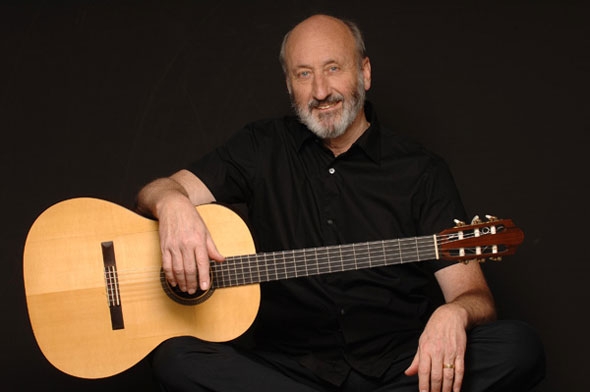 Stookey and his bandmates Peter Yarrow and the late Mary Travers, who died in 2009, were among the folk musicians at the heart of the 1960s civil rights protests, most memorably performing at the March on Washington in 1963. “Peter, Mary, and I sang Pete Seeger’s ‘If I Had a Hammer’ and Bob Dylan’s ‘Blowin’ in the Wind’ from the steps of the Lincoln Memorial at the podium where Martin Luther King Jr. delivered his ‘I Have a Dream Speech,’” says the 73-year-old Stookey, who lives in Maine. “Dartmouth’s decision to bring Music2Life to campus for this acknowledgement of King’s life and leadership seems to me inspired and synergistic.”

Music2Life (M2L) is part of the Public Domain Foundation, which Stookey started in 1971 to channel the proceeds of the “Wedding Song” to charity. M2L encourages the creation of music for social change and since 2000 has sponsored a biannual contest and concert. The organization also supports a M2L Fellows program that affords musician activists a chance to partner with a nonprofit and make music-based social programming. Amy Carol Webb and Josh White Jr., the current fellows, will share their music and fellows projects at Dartmouth on Saturday night along with Stookey and Houston rapper Baby Jay. Webb and White are also featured in the evening’s two documentary films, Our Living History and Songbird, which illustrate how their talents are used for change in their communities. Following the Spaulding concert, Baby Jay will perform again, along with several student groups, at Collis Common Ground from 10 p.m. to midnight. 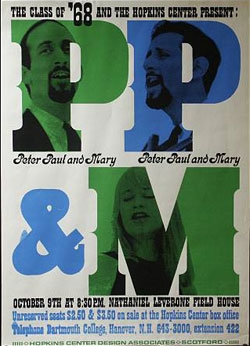 Poster from Peter, Paul and Mary’s concert at Dartmouth’s Leverone Field House in the 1960s. (Courtesy of Sally Farr)

Earlier in the day, Stookey will take part in a 1 p.m. panel discussion, “Why Music Matters—Understanding Music’s Impact on Social Justice,” facilitated by Dartmouth philosophy professor Susan Brison. This will be followed by a songwriting workshop that is open only to Dartmouth students. One of the songs created during this workshop will be performed at the Spaulding concert later that night. “The idea of our concert, seminar, and songwriting workshops is to show just how meaningfully songs of conscience might fit into the day to day,” says Stookey, who now has a solo career and also performs several times a year with Yarrow.

A showcase of musician activists will also be held at Salt Hill Pub in Hanover from 4 to 6 p.m. on Saturday, hosted by Stookey’s daughter, Liz Stookey Sunde, and singer-songwriter Arlon Bennett. These musicians will also meet beforehand with students and the public at One Wheelock in the basement of Collis from 1 to 3 p.m.

“I’m looking forward to connecting someone’s current music listening habits to their heartfelt desire for a more equitable world,” says Stookey of his participation in Dartmouth’s day of “Music for Change.” “As Dr. King said from Montgomery in 1965, ‘The end we seek is a society at peace with itself, a society that can live with its conscience.’”