The mission: create an 80-foot painting in a week.

That’s exactly what some local cartoonists are doing on the Dartmouth campus early in winter term.

Alumni and students from the Center for Cartoon Studies (CCS) in White River Junction, Vt., are leading the charge to put a mural on a wall in the Class of 1953 Commons. Jen Vaughn, Laura Terry, Katherine Roy, and Jon Fine, aided by Dartmouth students, are painting a winter scene on the temporary divider that separates dining operations from construction on the former Thayer Dining Hall. The wall will be removed after winter term. 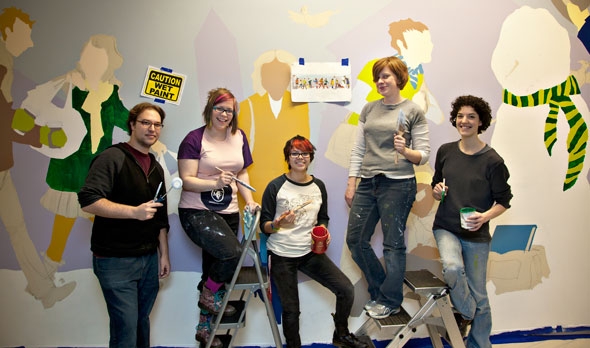 Center for Cartoon Studies alumni and students, along with Dartmouth students, are painting a mural on a temporary wall in the Class of 1953 Commons. From left, Jon Fine, Jen Vaughn, Julie Fiveash ’13, Laura Terry, Katherine Roy. (photo by Joseph Mehling ’69)

Timothy Duggan, assistant director of the Collis Center for Student Involvement, connected the dots between Dartmouth and CCS. “Director of Dartmouth Dining Services David Newlove told me about the temporary wall they were constructing,” Duggan recalls. “He said it would be pretty bleak and wondered if I knew any students who could paint something on it.” Duggan is an active event volunteer in White River Junction, Vt., helping with such varied events as the Halloween Parade, Revolution Fashion Shows, Main Street Museum, and Tupelo Music Hall, and he immediately thought of CCS. “I like to connect students to the culture of the Upper Valley, and this seemed like a good opportunity.” He contacted Vaughn, a cartoonist and the librarian at CCS’s Charles Schulz Library, and a project was born.

“When Tim asked me, I immediately said yes,” says Vaughn. “It was both the chance to do something at Dartmouth and collaborate with cartoonists.” To get started, she says, “I needed not only an amazing team of cartoonists but people I knew would be fearless slapping down paint on a wall instead of a canvas. So I chose Laura, Katherine, and Jon.” Vaughn chronicled the project in pictures that she put up on Flickr.

Duggan also knew there were students on campus who would be interested; in fact, one of his student assistants, Julie Fiveash ’13 , instantly came to mind. Julie loves graphic novels so much she founded DRAW!, a student comic book club. “We’re a collective of Dartmouth students interested in comics. We draw, write, and talk about comics on a daily basis.” 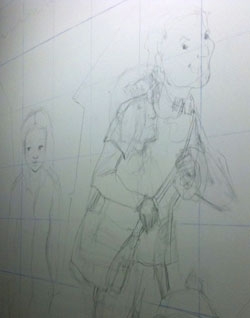 A mural sketch waiting to be filled in with paint. (photo by Kirk Cassels)

The mural group, which has also included Victoria Oosterhout ’12, began work on Monday, January 3, by sketching out the image they had devised on the walls of the entryway to the Food Court dining area. They had to limit their work time to before the 11 a.m. dining hall opening time, when the walkway becomes too crowded. They plan to finish their work on Sunday, January 9.

The mural is the latest instance of collaboration between Dartmouth and CCS. Roy spent time on campus in July 2009 working as cartoonist Jules Feiffer’s intern when he served as a Montgomery Fellow. “It was a lot of work, but I was delighted to be a part of the College community. I love Dartmouth; I think it’s a wonderful place to teach and to work.”

Fiveash has enjoyed working on the mural with kindred spirits from the community. “I’m very happy this mural project has come into being as it lets Dartmouth see the kind of work the Center for Cartoon Studies does. I’m planning on creating a larger bond between CCS and Dartmouth with future projects in DRAW!