“The Winter Carnival of the Outing Club won a deserved success, and will undoubtedly remain a permanent feature of Hanover winter life.”–The Dartmouth, 1911

In winter in northern New England, it’s not often that students have the chance to strip down to a bathing suit, walk barefoot onto a frozen pond, and jump through a hole into the icy water. But the Polar Bear Swim is just one of the ways Dartmouth students celebrate Winter Carnival and thumb their noses at winter, as writer Jim Collins ’84 phrased it recently in Yankee magazine. 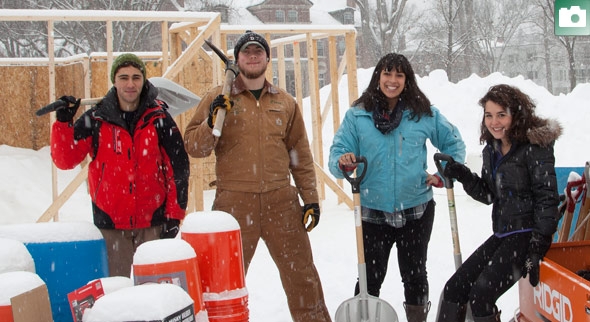 Leaders of 2011 Winter Carnival gathered in front of the snow sculpture frame on a snowy January 18. From left: Michael Perlstein ’14, junior co-chair; Richard Clark ’11, chair of the snow sculpture committee; Grace Dowd ’11, co-chair of Winter Carnival; and Sophie Novack ’11, co-chair of Winter Carnival. Not pictured is Alex Welton ’14, a junior co-chair. (He was in his “Humanities II” class.) More than 50 students are responsible for organizing Carnival. (photo by Joseph Mehling ’69)

Held every February since 1911 (except during World Wars I and II), the iconic event created by undergraduates celebrates its 100th anniversary this year. The 2011 Carnival, to be held February 10-13, features Division I NCAA alpine and cross-country ski races as well as hockey and basketball games, a large snow sculpture on the Green, student races (in costume) on the Green and the golf course, and the Occom Pond Party for families. For this year’s Carnival, named “Carnival of the Century,” Sophie Novack ’11 and other student organizers are planning to reinstate events such as the Carnival Ball, a formal dance held from 1913-1932; snowshoe races on the Green, which took place at the 1911 Carnival; and a snow sculpture contest for student organizations, which began in 1927 and took place through the 1980s. See the schedule of events (pdf). 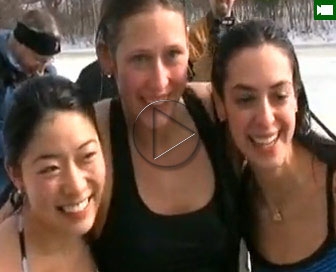 View students participating in the Polar Bear Swim in this highlight video of the 2009 Winter Carnival.

“What I love about Carnival is that it’s a chance for campus to celebrate winter,” says Novack, a senior from New York City who is serving as co-chair of the festivities along with Grace Dowd ’11. “A lot of times there’s this idea that people hole up in their rooms for winter term. Carnival is an opportunity to counter that and to give winter a new kind of spirit.” Other key organizers of the 2011 Carnival are the chair of the snow sculpture committee Richie Clark ’11, who is planning to recreate a snow castle first built by Dartmouth students in 1929.

Dowd, a senior from Birmingham, Ala., first volunteered for Carnival her freshman year because she said she was “interested in helping to plan such a huge tradition” and she “needed something to do in the cold.” Now a senior, she’s helping again, and planning to participate in the Polar Bear Swim—for the fourth consecutive year.

View video highlights of the 2009 Carnival, including the Polar Bear Swim, and a slideshow of historic Carnival images. 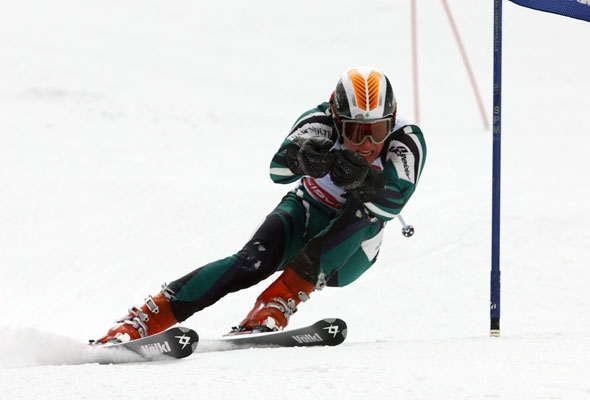 Dartmouth’s elite athletes have been part of Carnival throughout the history of the event. (photo Joseph Mehling ’69)

Since its founding, Carnival has been the setting for some of the most elite winter sports competition in the world. Contests over the years included ski jumps and cross-country ski races (held at the first Carnival), some of the first downhill ski races in the nation, ice hockey, speed skating, and later basketball and swimming. Dartmouth’s teams, often consisting of Olympic-bound athletes such as skiers Dick Durrance ’37 and Chiraru Igaya ’57, fared well. From 1922-1957 Dartmouth won 22 of the 35 championship cups in skiing among six teams including McGill and Denver University. Today the Dartmouth ski team continues the winning tradition. The team won the national championship in 2007 won a remarkable 15 consecutive Eastern Intercollegiate Ski Association Carnivals from 2008-2010.

The event grew from a Winter Field Day event started in 1910 by Fred Harris ’11 of the Dartmouth Outing Club (DOC). From the start, the DOC’s motto was (and still is), “Get Out.” In 1911, social events were added to the Winter Field Day and it was called Winter Carnival for the first time.
Image 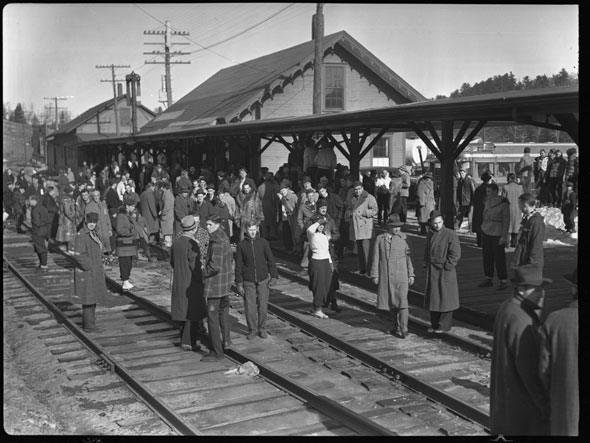 Students and others wait for visitors to arrive on a Winter Carnival special train at the Norwich-Hanover Railroad station in Norwich, Vt. The photo was taken by College Photographer Adrian N. Bouchard sometime between 1937-38. (photo courtesy Rauner Special Collections Library)

Carnival grew over the years, and by the ’30s, special “Winter Carnival” trains were running from Boston and New York to the Norwich, Vt.-Hanover, N.H. station. From the ’30s through the ’50s, thousands of visitors would come to town for Carnival; 1952 saw an eight-mile traffic jam leading onto campus. In 1955, Sports Illustrated called it, “a 30-ring circus that makes Ringling Brothers look like a two-wagon job.” Popular events included the Outdoor Evening and the crowning of the “Queen of the Snows.”

The 100th anniversary was recognized recently with the publication of the 2010 book, Winter Carnival: A Century of Dartmouth Posters. The book features all the posters, some of which today sell for thousands at auctions, that were created from 1935 to 2010. Baker Library currently has an exhibit of many of the posters.
Image 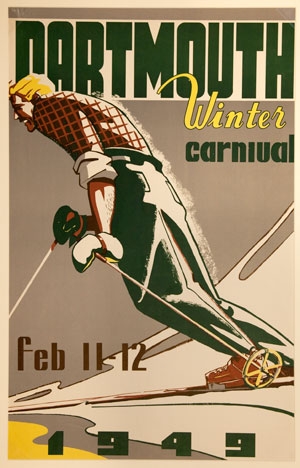