“Where were you when history happened?” It’s a question that calls up memories of national or international tragedies and triumphs, the kind that cement one’s place in the world. For Alexandra Schindler, a member of the Class of 2010 and a Fulbright Scholar, the answer is Cairo, Egypt, when the country rallied to end Hosni Mubarak’s 30-year rule. 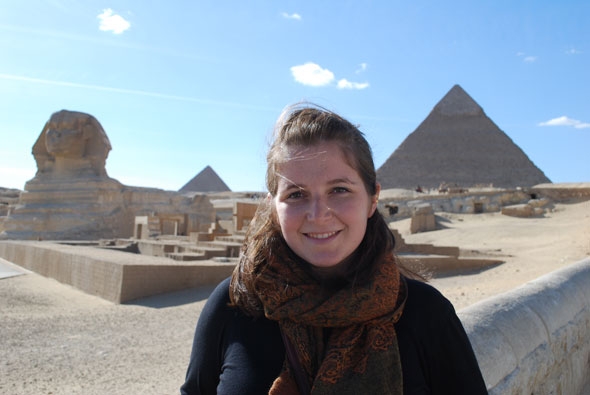 Schindler left Cairo on February 1, on the advice of the Fulbright program. She has since returned and plans to stay until May 2012, when she’s due to complete her master’s degree; following that, she intends to move back to the U.S. and study for a PhD. For now, here’s her take on what it was like to see millions of Egyptians take their freedom back.

Many of us have been following what’s going on in Egypt through news reports, but you were actually there. Were you aware that tensions had been rising in Egypt?

I lived in Egypt for a term during my time at Dartmouth and since returning this past August, I did notice that things seemed more tense. It was as if the entire city were on edge at times, waiting for that tipping point. Many historians and academics have been writing for the past decade that Egypt was approaching a time of great change, but I don’t think anyone expected it this soon or quite so suddenly.

Prior to the uprising, how were you spending your time in Cairo? What was an average day like for you?

In Egypt, I am pursuing a master’s in gender and women’s studies at the American University in Cairo (AUC). I am also studying Arabic with a private tutor in order to continue improving my language skills. An average day usually consists of taking the metro to see my Arabic tutor and then taking a bus out to New Cairo, where the AUC campus is located, for class. Since Cairo is truly the “city that never sleeps,” the city is lively at all hours, and my favorite thing to do is to meet friends for tea or juice at a cafe downtown. The city cools down, and everyone is out on the streets, enjoying the night air.

What was your last day in Egypt like? How were you feeling and what did you see?

My last day was a bit rushed because I had to pack up my room. At one point, walking to friend’s apartment to drop off a suitcase, I ran into a group of pro-Mubarak protesters, which did make me a bit nervous. Just as I arrived at the airport, I received phone calls from friends telling me about the violence that had erupted in Tahrir square between pro-Mubarak and pro-democracy demonstrators.

I did get the chance to go to Tahrir square a few times, which is only a 10 minute walk from my apartment. I am so grateful to have been a witness to the strength and inspiration of the Egyptian people who came together, demanding the personal freedoms and rights that they have so long been denied. It was a beautiful sight: Egyptians from all over the city, all gathered in one place, cheering, singing, praying for their freedom. Many passed out food to the people who had been in the square for days, others circulated water bottles, and still others collected trash and loaded it into a burned out car that sat in the square. For the most part, people were chanting and making signs, but those who did notice foreigners simply asked us to take pictures of them in order to help convey their message of peace and hope to the rest of the world.

It’s been a little more than two weeks since you left Egypt, but you’ve since returned to Cairo. What’s it like to be there now?

I arrived back in Egypt on Sunday, February 20. My classes started the next day, and I was reluctant to miss the semester. Returning to Cairo this time around, things seemed relatively normal on the ground. Tahrir is still filled with more people than usual, sporting headbands with the Egyptian colors and waving flags. As many have noted of the “New Egypt,” the traffic continues to be as abysmal as it was beforehand, perhaps even worse. My flight back to Cairo had only 30 or 40 people on a very large plane, and there was a sense of camaraderie and excitement among all the Egyptians, most of whom had never met one another before. My sense so far is that people are cautiously hopeful for the future of their country.

Has your opinion or perspective about the country changed?

While in Egypt, many people, including Egyptians, have always commented on the inability of Egypt to change, much less change quickly. I am amazed by the incredible spirit, wisdom, and strength of the Egyptian people during (and after) the protests. Although many news reports speak of an “18 Day Revolution,” this revolution occurred because of the hard-work and incredible foresight of Egyptians. I am so grateful to be living in Egypt now, having witnessed “the power of the people” in this revolution.

I asked my cab driver on the way back from the airport if he thought the new Egypt was better. He replied proudly, with a big grin on his face, “Of course! Freedom is sweet.”  I am filled with hope for the possibilities of the new Egypt, but only time will tell what the future holds for Egypt and the rest of the Middle East.