This story was updated on March 8.

As part of its 50th anniversary celebration, the Peace Corps honored John Rassias, longtime professor at Dartmouth and developer of the Rassias Method of teaching languages. Rassias introduced his approach, which he has called “teaching heart-to-heart,” to the Peace Corps in 1965. President John F. Kennedy created the Peace Corps by executive order on March 1, 1961. 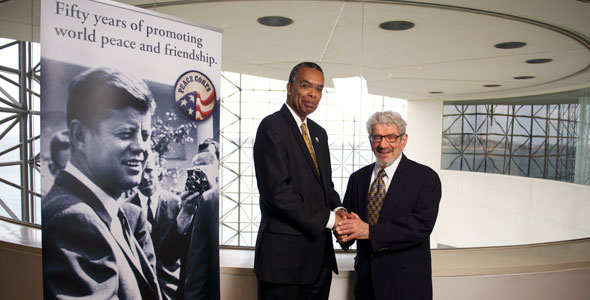 During an event at the John F. Kennedy Library and Museum on March 5, Director of the Peace Corps Aaron Williams (left) said Rassias was a “pioneer with our essential language training programs.” Rassias has been a proponent of cross-cultural understanding for his entire career. (photo courtesy of the Peace Corps)

Rassias was recognized by Director of the Peace Corps Aaron Williams during a “50 Years of the Peace Corps” event at the John F. Kennedy Library and Museum in Boston on March 5. Williams said, “Dr. Rassias was a pioneer with our essential language training programs that have contributed to the success of Peace Corps in many West African host countries. As we commemorate Peace Corps’ 50th anniversary, it is an honor to pay tribute to the thousands of Americans who have served and supported this agency since 1961.” Williams served as a Peace Corps’ volunteer in the Dominican Republic from 1967-1970.

In the Peace Corps’ first decade, Rassias served as a consultant and troubleshooter for the organization’s language programs. He was director of the first pilot program of languages in French-speaking West Africa, where he assisted volunteers in Togo, Senegal, and Gabon. Since then, not only Peace Corps volunteers but thousands of Dartmouth students and visitors to the Dartmouth College Rassias Center have increased their knowledge of new languages thanks to the Rassias Method.

Through Worldfund’s Inter-American Partnership for Education (IAPE), the Rassias Method has been introduced to hundreds of English language teachers in Mexico. Last year the IAPE, which is a Clinton Global Initiative Commitment, brought 40 teachers from Mexico to campus to learn the Rassias Method. (Staff members at IAPE include Jim Citron ’86, director; Luanne Zurlo ’87, founder and president of Worldfund; and Mary Bourque ’87, chief financial and operating officer at Worldfund.) 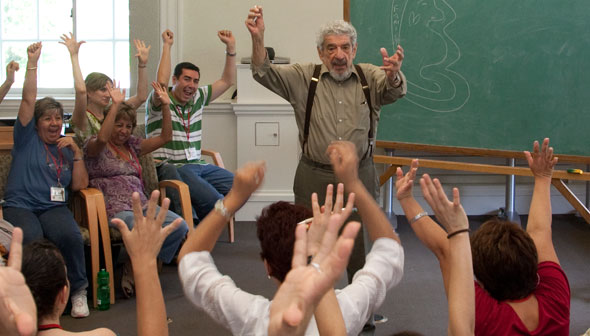 John Rassias works with English-language teachers from Mexico at Dartmouth as part of the Inter-American Partnership for Education. (photo by Joseph Mehling ’69)

A member of the Dartmouth faculty since 1965, and currently the William R. Kenan Professor of French and Italian, Rassias is a professor admired by many Dartmouth students and alumni. In 2008, he received the Jerome Goldstein Award for Distinguished Teaching, as voted on by members of that year’s graduating class.

Dartmouth and the Peace CorpsThe early history of the Peace Corps is intertwined with Dartmouth. In 1963, the late R. Sargent Shriver, then director of the Peace Corps, wrote to Dartmouth to note that its graduates led the Ivy League in percentage of Peace Corps volunteers. (Twenty-nine were serving, including the late Paul Tsongas ’62, former U.S. Senator, D-Mass., and John Murphy ’58, who was prominently featured in a 1963 National Geographic article about the Peace Corps.) Shriver wrote: “But, like Daniel Webster, we at the Peace Corps believe Dartmouth College represents something greater than mere size or numbers. Dartmouth means the kind of support and student interest the Peace Corps must have from the American University Community.”

Today, Dartmouth continues to be ranked a Peace Corps’ “Top College,” with 17 alumni currently serving overseas. In 2006, the College had more graduates serving than any institution in the category of small college or university, and since the Peace Corps was founded, more than 600 Dartmouth graduates have served. In 2010, Dartmouth hosted a Peace Corps’50th anniversary panel that included current Peace Corps’ staff members Shari Hubert ’92, director of recruitment and Kiva Wilson ’04, diversity outreach specialist. The College will be celebrating its relationship with the Peace Corps during an event on November 15, 2011.

To learn more about Dartmouth and the Peace Corps, visit the Tucker Foundation website.