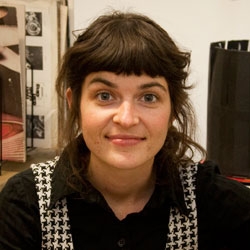 Assistant Professor of Film and Media Studies Jodie Mack won an award for her animated film. (photo by Jospeh Mehling ’69)

“I am very excited to receive this award from the BMFF, as the festival has a long tradition of representing experimental, underground, quirky, and dynamic works,” said Mack, who began teaching at Dartmouth in September 2010.

Mack described the 28-minute “Yard Work is Hard Work” as “an animated musical featurette made with thousands of cut-outs from discarded printed materials. The piece follows a pair of newlyweds as they learn the perils of home ownership and life in general.” She told Chicago essayist Hugh Iglarsh that the project was inspired prior to the “real estate cataclysm” in 2005. “I was staying with people in Oregon, watching home improvement shows on cable TV, and wondering how my friends who were working at pizza places could possibly afford these lifestyles, and how much debt it must involve,” Mack told Iglarsh. “Were they expecting to strike oil? People get seriously tripped up by these messages. 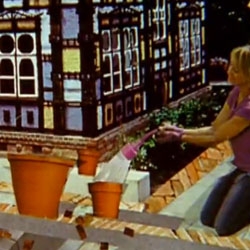 The BMFF is an international juried competition that was founded in 1981 and takes its name from the first motion picture studio built by Thomas Edison in 1893. According to its website, the festival focuses on short works that “reveal an inventive, insightful, and uncommon spirit.” It also features an annual tour that travels to 65 venues, including Dartmouth (date and time to be announced).

You can watch a short excerpt of Mack’s awarding-winning film on Vimeo.com.