Of the many animals now whose genomes have been completely sequenced, the one with the most genes is the near-microscopic freshwater crustacean Daphnia pulex, sometimes referred to as the water flea. Daphnia is the first crustacean to have its genome sequenced, and it contains more than 31,000 genes (humans only have about 23,000). 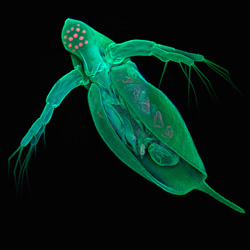 Daphnia pulex (water flea) has a number of eye spots near the front of its head. (photo by Jan Michels, Christian-Albrechts-Universitaet zu Kiel)

That discovery is just one of many in a report published in the February 4, 2011, issue of the journal Science and in a thematic series of companion papers by members of the Daphnia Genomics Consortium. The consortium is an international group of scientists from Dartmouth and dozens of other institutions, including the Center for Genomics and Bioinformatics (CGB) at Indiana University Bloomington and the U.S. Department of Energy’s Joint Genome Institute.

Dartmouth was one of the original groups that helped to form the Daphnia Genomics Consortium and identify the means to have the Daphnia genome sequenced. An interdisciplinary group of Dartmouth scientists, which included Josh Hamilton (now a senior scientist and chief academic and scientific officer at the Marine Biological Laboratory in Woods Hole, Mass.); Celia Chen, research associate professor of biological sciences; Joseph Shaw (now on the faculty of Indiana University’s School of Public and Environmental Affairs), and Carol Folt, provost and the Dartmouth professor of biological sciences, led a team that conducted some of the earliest experiments examining the genetic responses of Daphnia to critical environmental stressors.

Says Folt, “Working with this group of interdisciplinary scientists, not only from Dartmouth, but across the world, has been a terrific opportunity. What the consortium is accomplishing in a relatively short time demonstrates the power of working across boundaries to address complex environmental and biological problems.”

A paper whose co-authors include current Dartmouth researchers Chen, Folt, and Thomas Hampton, bioinformatics specialist in the Dartmouth Medical School Department of Pharmacology and Toxicology, is one of the papers highlighted in conjunction with the publication of “The Ecoresponsive Genome of Daphnia pulex” by CGB Director John Colbourne and his co-authors in Science. The Dartmouth co-authored paper is titled, “Gene Response Profiles for Daphnia pulex Exposed to the Environmental Stressor Cadmium Reveals Novel Crustacean Metallothioneins” and was originally published in BMC Genomics in 2007.

Inquiry on Daphnia is ongoing at Dartmouth, notes Chen. “Our continued Daphnia research to be featured in upcoming papers will provide the first functional application of Daphnia environmental genomics in examining the adaptation of natural populations to metal contamination.”

Read an Indiana University Bloomington press release about the findings published in Science.