The first time Noel Paul Stookey performed at Dartmouth was on October 9, 1965, with the celebrated folk trio Peter, Paul & Mary, in Leverone Field House. It was just two years after the group’s historic March on Washington performance at the Lincoln Memorial, where Stookey, Peter Yarrow, and the late Mary Travers sang at the podium from which Martin Luther King Jr. delivered his “I Have a Dream Speech.”

When Stookey returned to Dartmouth for a day of “Music for Social Change” on January 22, this time he shared the Spaulding Auditorium stage with artists including three Dartmouth undergraduates—Diane D. Chen ’14, Aaron Colston ’14, and Joseph Naeem ’11. They were among the 20 students who participated in a social justice songwriting workshop hosted by Stookey and singer-songwriters Josh White Jr. and Amy Carol Webb earlier that day.

These events were part of Dartmouth’s nearly month-long annual Dr. Martin Luther King Jr. (MLK) celebration, “Injustice Anywhere is a Threat to Justice Everywhere.” Among almost 30 campus events were a community faith celebration with Diane Nash, a key Civil Rights figure who as a 22-year-old led the sit-ins that desegregated Nashville’s lunch counters, and a keynote speech by New York University Law Professor Bryan Stevenson, who is also executive director of the Equal Justice Initiative. 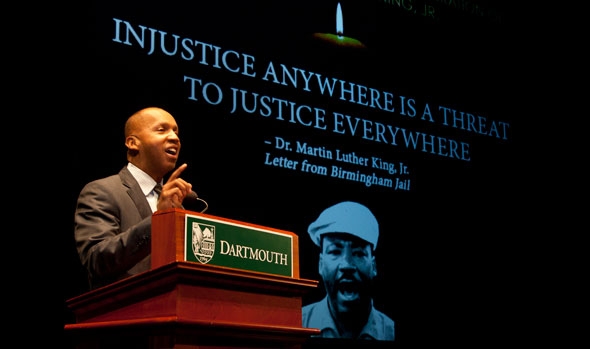 Stevenson delivered a powerful address in which he spoke about the inequities he has witnessed while providing legal aid to prisoners, many of whom are on death row. “The system treats you better if you are wealthy and guilty than if you are poor and innocent,” Stevenson said. His advice to students who hope to make a difference in the world? “First, do the right thing, even when it’s the hard thing to do. Second, do not educate yourselves away from passion. … Finally, never persuade yourself that it’s a problem to care deeply about things you care deeply about.”

The songwriting workshop and concert, as well as a student brunch with Nash and a dinner with Stevenson, gave undergraduates access to “activists who keep the King legacy alive in today’s world,” according to Gabrielle M. Lucke, chair of the College’s MLK celebration and director of Diversity Training and Educational Programs. “At every turn, we have had the opportunity to connect our students with gifted, compassionate activists from a variety of fields and endeavors. Our students have been challenged to do their part to link with this legacy.” 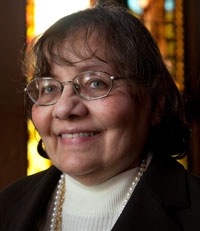 Diane Nash, a key Civil Rights figure, met with Dartmouth students as a part of the MLK celebration. (photo by Joseph Mehling ’69)

The MLK celebration events also led to some memorable encounters. At brunch with Nash, Dartmouth Gospel Choir member Michelle Domingue ’12 from Plaquemine, La., shared details of a recent phone conversation he had with his grandmother, who had long admired Nash’s civil rights activism. Joseph Naeem was thrilled to learn the fundamentals of Travis-style fingerpicking from Noel Paul Stookey and to perform with “three great musicians. There was a moment where I was harmonizing with all three singers backstage before our concert. What a joy!” says Naeem, a philosophy major from Boonton, N.J.

The student-penned song, “Open Your Heart to Me,” a meditation on the March on Washington, was performed near the end of the Spaulding concert and featured Aaron Colston  on flute. “Noel really emphasized telling a story and making people feel what we were writing about and to really believe in it,” says Diane D. Chen, a pre-med student from Stillwater, Okla. The song was met with a standing ovation from the audience. “When I was on stage, I didn’t think much about what was going on. I just heard music and did my best to follow along,” says Colston, a Los Angeles native. “It wasn’t until during the applause that I thought about what had happened: ‘I actually played with these guys! This is insane!’ ”

“In 1962, Dr. King came here and called the community and ‘men of Dartmouth’ to action during a speech in Dartmouth Hall,” Lucke says. “Building on that history, our students who met with Diane Nash, Bryan Stevenson, and Noel Paul Stookey heard guidelines to action and how to do good work for others.” 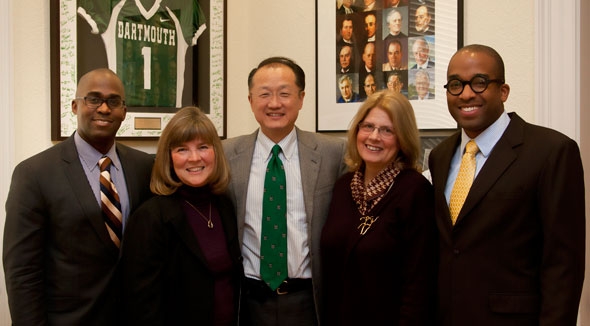 The Social Justice Awards, given each year during the College’s Martin King Jr. celebration, honor the lives and careers of Dartmouth community members who have enriched our world through contributions to civil rights and social justice. The 2011 award recipients, pictured with President Jim Yong Kim, are:

Dartmouth’s chapter of Habitat for Humanity, which collaborates with Upper Valley Habitat for Humanity to provide affordable housing for lower income families, was the 2011 Student Organization Honoree.
Written by
Bonnie Barber
Share this
FacebookTwitterEmail
Articles 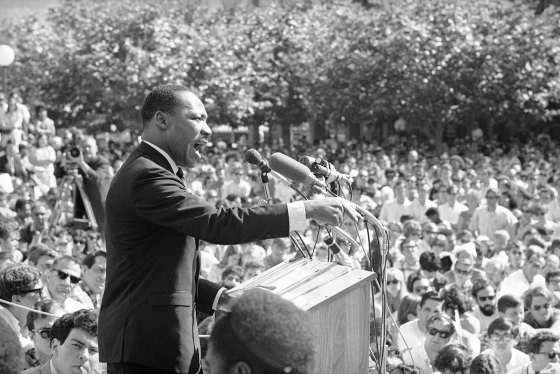