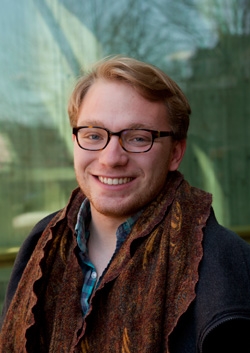 Christian Brandt ’12 has been selected as a 2011 Truman Scholar.

Christian Brandt, a member of the Dartmouth Class of 2012, has been chosen as a 2011 Harry S. Truman Scholar. The scholarship awards up to $30,000 to college juniors to pursue graduate studies in public service fields and also provides assistance with career counseling, internship placement, graduate school admissions, and professional development.

Brandt is a junior anthropology major from Moscow, Idaho. Following his graduation from Dartmouth, he intends to pursue a PhD in anthropology, concentrating on socio-cultural anthropology. Studies in social work and in the law may also figure in  his graduate and post-graduate education. He envisions a career in advocacy, and later in higher education, centered on the issue of homelessness. “I’m excited for the future and for the road the Truman scholarship takes me down,” says Brandt. “It’s such an honor to have won this award.”

Brandt received word of his selection as a Truman Scholar directly from Dartmouth President Jim Yong Kim on March 30.

Brandt traces his engagement with the issue of homelessness to his experience as a visiting high school student in Copenhagen, Denmark. There, he encountered homelessness in a setting  and a society different from his hometown, where he had volunteered with relief organizations including a food bank. “My feelings of the unfairness of what I saw in Denmark has stuck with me and continues to influence my desire to work with the homeless through policy reform and education,” he says.

Brandt carried that engagement to Dartmouth and beyond. While studying in Rome during the spring term of his sophomore year, Brandt volunteered at a soup kitchen at the Roma Termini train station.  That cross-cultural experience, he says, “convinced me that anthropology, with its commitment to specialized cultural and local knowledge, fit into my desire to work with the homeless in America. There is no one solution to homelessness, and in order to help the homeless, knowledge about their cultural system is mandatory.”

At Dartmouth, Brandt has been a leader of and advocate for the LGBT community, serving as three-time co-chair of the organization Gender Sexuality XYZ. He is a Diversity Peer Advisor, and has been the LGBT representative to the Diversity and Community Affairs Committee of Dartmouth’s Student Assembly. He also was director of the student-organized fall 2010 Pre-Orientation programming for incoming Dartmouth students. Brandt has worked as a research assistant in the Department of Anthropology as well.

The 60 Truman Scholars for 2011 were selected from among 602 applications from 264 colleges and universities. Among the qualifications: recipients must be U.S. citizens, have outstanding leadership potential and communication skills, and be committed to careers in government or the not-for-profit sector. Brandt is Dartmouth’s  22nd Truman Scholar since the award was instituted in 1977. For more information on the Truman Scholarship, see Dartmouth’s National Scholarships/Fellowships website.