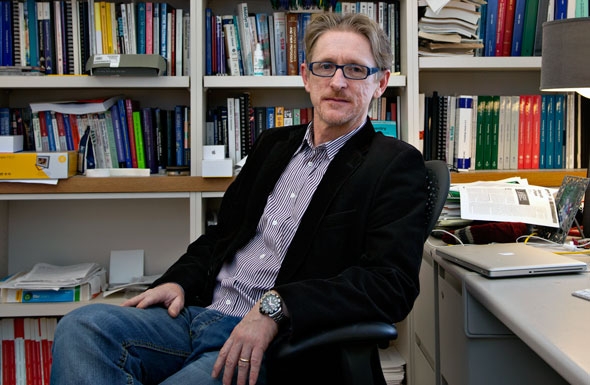 Ubiquitous computing—or pervasive computing—is a field of computing that encourages the integration of microprocessors, storage, and wireless communications into everyday objects and explores new paradigms of human-computer interactions that affect and influence everyday lives. The concept of ubiquitous computing was originally introduced in 1988 by the late Mark Weiser who was a leading computer scientist in the late 1980s and early 1990s.

“Pervasive computing covers advances across many technologies familiar to us including the smartphone, wireless networks, and embedded smart tags in objects,” says Campbell. “It allows us to communicate and interact with the world around us more naturally.”

“I think technology has helped and hindered us. It has made us much more productive, but I feel overloaded and interrupted by the computers and applications around me,” says Campbell. “Weiser thought that if we pushed technology in to the background, we’d find ways to interact with computers in a much more naturalistic fashion.”

“In a way, it is inevitable that computing will play an ever increasing role in our lives,” says Kotz, who has been involved in pervasive computing for 15 years. “These devices, ever smaller and ever smarter, can help to make our lives safer, healthier, more efficient, and more fun.” His current research focuses on “developing technologies that actually meet those aims - without adding undue complexity or new risks to our security or our privacy.” One area of emphasis is the potential of mobile devices to play a role in healthcare and personal wellness.

“Pervasive computing more intimately connects people with computing and builds applications that have social and societal benefit,” says Choudhury, who directs the People Aware Computing Group at Dartmouth. “I think this could help in attracting currently underrepresented communities to pursue a degree in computer science.”