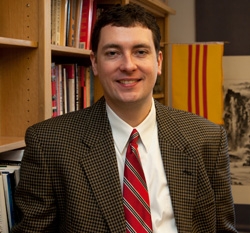 Assistant Professor of History Edward Miller’s 2004 paper “Vision, Power and Agency: The Ascent of Ngô Dình Diêm, 1945–54” has been named one of the 10 key papers published in the Journal of Southeast Asian Studies during the past decade. (photo by Joseph Mehling ’69)

In its special 50th anniversary edition, the Journal of Southeast Asian Studies named an article by Assistant Professor of History Edward Miller one of the 10 key papers published by the journal in the last 10 years. “Vision, Power, and Agency: The Ascent of Ngô Dình Diêm, 1945–54” was published in 2004, and explored the activities of Diêm before he became the leader of South Vietnam in 1954. The article was reprinted in Making Sense of the Vietnam Wars: Local, National and Transnational Perspectives (Oxford University Press, 2008) and has also been translated and published in Vietnamese.

“This article was a piece of a larger project—a book—that I am finishing currently,” says Miller. “The book looks at the origins of the Vietnam War and the relationship between the U.S. and Ngô Dình Diêm during the period of his rule from 1954 to 1963.” To make sense of that relationship, he notes, “you need to know something about Diem’s pre-1954 life and career.” As Diem has never been the subject of a proper biography, Miller says, previous studies have devoted little attention to his activities and ideas in those earlier years. The 2004 article, he explains, “was an attempt to remedy that problem by situating Diem within the larger political and intellectual trends of Vietnam’s late colonial era. I based it not only on research in American archival materials, but also on my work in French and Vietnamese primary sources.”