Assistant Professor of Chemistry Jimmy Wu recently received a Faculty Early Career Development (CAREER) Award from the National Science Foundation (NSF). The award recognizes faculty who exemplify the role of teacher and researcher, and the integration of the two. 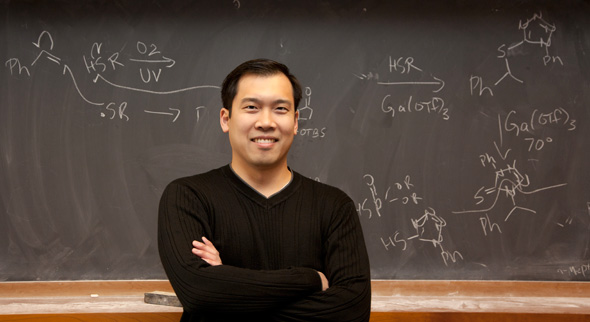 Assistant Professor Jimmy Wu will explore how sulfur-containing molecules could be used for developing pharmaceuticals. (photo by Joseph Mehling ’69)

Wu’s research focuses on the chemistry of sulfur, particularly how to make carbon-sulfur bonds. With support from the NSF CAREER Award, Wu’s project “Versatility of Phosphorothioate Esters in the Synthesis of Sulfur-Containing Molecules” will explore the synthesis of sulfur-containing molecules. Wu says that surprisingly little research is conducted on sulfur.

“Chemistry journals publish much work on the synthesis of carbon-carbon bonds, carbon-oxygen, and carbon-nitrogen bonding,” says Wu. “That’s expected; a lot of biologically active compounds contain oxygen and nitrogen. But if you look at the top two hundred drugs, by sales, fifty of them contain sulfur, and yet there isn’t a lot of research into how to make carbon-sulfur bonds. We’re developing new ways to make these types of bonds.”

Wu’s lab will create sulfur bonds using two processes. The first begins with allylic alcohols and combines them with phosphorothioic acids. Shining ultraviolet light on the mixture produces carbon-sulfur bonds by displacing alcohols through a radical-mediated process. The group will also use hydrothiolation to produce these bonds, which involves taking different sulfur reagents and adding them across carbon-carbon double bonds.