Pamela Crossley, the Robert 1932 and Barbara Black Professor of History, is a scholar of Chinese history who focuses on the Qing empire (1644–1911), the last empire to rule China and one of the greatest of the early modern period. She has been a Dartmouth faculty member since 1985. 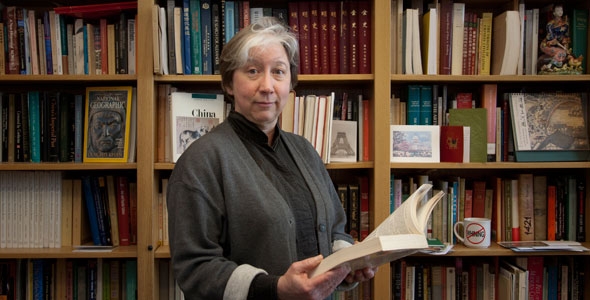 Professor Pamela Crossley, a scholar of Chinese history, says teaching undergraduates is “the very best situation that a historian can get.” (photo by Joseph Mehling ’69)

Research, writing, and riding: Crossley is a leading scholar in her specialty but also pursues writing more broadly. The eight books she has authored or co-authored include The Earth and Its Peoples, a widely used textbook. One of her current projects is a book about the development of horsemanship across Eurasia. In the course of her research, she made an original discovery about a form of riding that “came to a zenith in the riding of the Mongols. Their innovative saddle design not only helps explain Mongol victories, but also—due to factors including changing social structures and warfare tactics—their famous defeat in the battle of ‘Ayn Jalût in 1260,” argues Crossley, who is a dedicated horsewoman.

Productive tension: Crossley finds that teaching undergraduates and writing for non-specialists makes her a better historian. “This very productive tension exists between doing specialist research on the one hand and on the other hand being pressed, always, to be able to give it this broad presentation,” she says. “I think it’s the very best situation that a historian can get.”

As a teacher, her priority is guiding students to uncover significance. “History is the study of the origins of information and the analysis of information. To present an interpretation, you first have to assess whether there’s anything significant about it,” she says. “When students make statements in their writing, I ask them ‘So what?’ until they arrive at the significance.”

There’s an app for that: Crossley also writes her own software to aid her students. Her custom online lexicon “relates our in-course vocabularies to both systems of Chinese romanization, as well as pronunciations in Japanese and Korean.” For her “Intellectual History of East Asia” course, she created a program that provides an introduction to and memorization tools for the Chinese classical text the Daxue (Greater Learning). Others have caught on as well. “It has become a pretty well-known app in the field and is downloaded by instructors and students from all over the world,” she says.

Familiar, not foreign: “There have been dramatic changes in my field since I entered it,” says Crossley, pointing to increased contact with Chinese culture. “The degree of Chinese language study and traveling to China are now much greater than when I was being trained.” The result, she says, is that “the quality of the study is so much more nuanced and credible now. The sense of China being ‘other’ is gone.”